David Slade (Hannibal, Hard Candy) is directing an adaptation of Norman Patridge’s horror novel Dark Harvest, and the Halloween-set film will, fittingly, be releasing during the Halloween season next year. 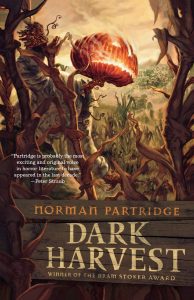 In the novel, which is set in 1963, a small Midwestern town is the site of an annual slaughter when a butcher knife-wielding, pumpkin-headed creature called the October Boy hunts and is hunted by the local teenage boys. One boy, Pete McCormick, knows that killing the creature is his only chance of escaping the dead-end town. But in order to do so, he’ll have to look true horror in the face—and discover October’s Boy’s terrifying secret.

Michael Gilio is writing the adaptation. MGM plans to release the film on September 24th, 2021.