THE DARK FOREST (AKA THE HUNTED): Film Review

Synopsis:
An experienced hunter and a cameraman head into a secluded forest to film a pilot for a hunting show. As they try to take down an impressive buck, some eerie happenings lead the men to believe they may not be the only hunters in the forest after all… 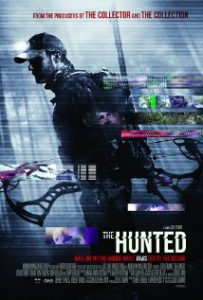 The Hunted was released in the US in 2014 and is finally getting a DVD release in the UK in August, under the new title The Dark Forest. I can only assume this re-titling was an attempt to cash in on the release of the Natalie Dormer horror film The Forest, though if that was the case they’re a little slow off the mark. Whatever you want to call it, The Dark Forest is an effective little found footage movie that may just make you rethink your next camping holiday. If you go down to the woods today, you might not be alone…

Josh Stewart (The Collector, The Collection) stars as Jake, a family man and experienced hunter who decides to pursue his ambition of helming a television hunting show. Enlisting the help of his friend Stevie (Ronnie Gene Blevins), a cameraman for local TV news, Jake sets his eyes on a big buck nicknamed ‘Movie Star’, so called because it is often photographed but still remains at large. Heading deep into the secluded woods, things don’t quite go to plan as someone or something seems intent on sabotaging their shoot.

There are a lot of things which work about The Dark Forest, which is why I was left a little disappointed that it wasn’t as good as it could have been. The directorial debut of Stewart, who also penned the script, the film is something like a cross between The Blair Witch Project and Grave Encounters, a combination which may make you cringe depending on your tolerance for the found footage genre. I’ve never been its biggest fan, but The Dark Forest keeps the shaky cam to a merciful minimum, and some of the early footage of the men making their way into the woods is quite immersive.  Unfortunately, a bizarre choice was made to include dramatic music towards the film’s climax, which not only makes little sense contextually (unless the supernatural force hunting them came with its own soundtrack…) but also deflated any tension garnered by the excellent sound design in the first half. Anyone who’s walked through the woods alone at night knows how creepy they can be, from the whispering of the breeze through the leaves to the rustling of unseen creatures in the bushes, and this film captures the presence of the forest perfectly, creating an environment rich in sound and movement which also feels isolated and quiet. A few early music cues are just subtle enough to seem like part of the ambient sound, but the sudden chase music in the last act is unforgivable and feels like an intrusion.

And what exactly is chasing them? The film makes the wise choice of holding its cards fairly close to its chest in the first half, opting for a slow pace driven by likeable characters and the gradual introduction of strange forces at play. Jake loses his knife, and later finds it stuck in a tree. Equipment malfunctions. A chilling scream which sounds like a woman is heard at night, which the men initially assume is a bobcat. Then a bobcat is found dead, but the screaming continues. 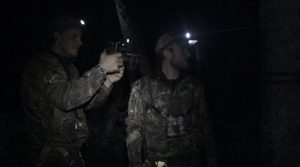 It’s eerie stuff, but sadly The Dark Forest never quite manages to take that to the next level and become genuinely frightening. The screaming in particular quickly loses its effect through extreme overuse, especially during the climax, when it’s heard over and over and over again with almost no payoff. The ending is a bit of a let-down, and you’ll wonder if that really is it before the credits start rolling. It’s a shame, because with a smarter script and a crazier climax, The Dark Forest could have been great. As it is, it’s simply passable. Some great acting and sound design elevate this above your usual found footage fodder, so check it out if you’re curious.

The Dark Forest is available on DVD in the UK from August 29th.