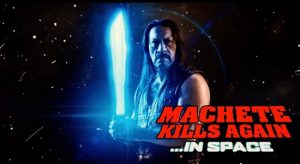 While Star Wars fever once again grips the world, there’s another intergalactic adventure on our radars right now, with Danny Trejo having suggested that work may soon begin on Machete Kills Again…in Space, the long-promised third outing for his ex-federale viglilante hero.

In a recent Facebook Live Q&A in promotion of Dead Again in Tombstone, the cult actor revealed, “We’re waiting. I’ve already talked to Robert [Rodriguez]. He says, ‘Yeah, I’m putting it together. Let’s start writing it.’ So I talked to Mel Gibson. I said, ‘Mel, hey, come on, let’s talk. Let’s do Machete Kills in Space.’ Mel goes, ‘I’m in. I’m ready. Tell Robert.’ So we’re gonna do it.”

Machete Kills…in Space was teased with an outlandish mock-up trailer stitched to 2013’s Machete Kills, the sequel to 2010’s Machete. The original film was borne of the fake trailer Rodriguez shot for he and Quentin Tarantino’s Grindhouse, and saw the director very much in Desperado/From Dusk til Dawn mode. A perfectly-pitched exploitation throwback with wonderfully over-the-top set pieces and on-point comedy, it was followed by Machete Kills which, while still a whole lot of fun and nuttier than anything else you’ll likely see in a cinema, overdosed a little on CGI kills and winky-winky humour for my liking.

Trejo’s words are the first we’ve heard of the series’ third instalment for a couple of years, so hopefully things will start moving soon. Rodriguez is busy as ever though, with his Alita: Battle Angel release coming up and work on the Escape from New York reboot beginning, not to mention the launch of his El Rey network, so we’ll see.