Following the very good news that Danny Trejo will appear in Rob Zombie’s 3 From Hell comes the release details of the beloved genre star’s latest, more under-the-radar flick. Premiering on VOD next month, sci-fi actioner Cartel 2045 sees Trejo caught up in a futuristic drug war, with the Mexican cartel in possession of some serious tech. Check out the cool new trailer, which basically looks like Machete, but with robots. And I’m cool with that.

The film, which was originally titled Juarez 2045, was written and directed by Chris Le, who previously worked with Trejo on Zombie Hunter. It also stars Power Rangers’ Alexander P. Heartman, Brad Schmidt (The Birth of a Nation) and Blake Webb (Colony). 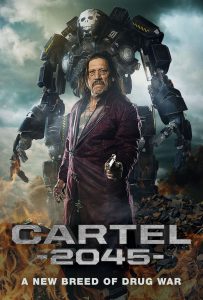 Synopsis:
The year is 2045, the continuing drug war has caused havoc between The United States and Mexico. Gear Side International, a robotics engineering company on the brink of bankruptcy, sells off their technology to the Cartel on the black market. With the advanced military robotics technology in the wrong hands the cartel uses it to their advantage; replacing their enforcers, hit men, and soldiers.

Cartel 2045 hits VOD on May 1st, from Uncork’d Entertainment.