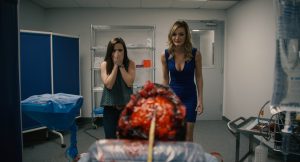 Zorya Films and Millman Productions are putting scream queen Danielle Harris under the knife in December, with the US theatrical release of Christopher Lawrence Chapman’s Inoperable.

Harris, known for her roles in the likes of Rob Zombie’s Halloween, Urban Legend, Hatchet II and III and See no Evil 2, plays Amy Barrett, who awakes in a hospital and must battle supernatural forces and adverse weather conditions if she is to escape.

Synopsis:
A young woman wakes up in a seemingly evacuated hospital with a hurricane approaching. She realizes the storm has awakened malevolent forces, trapping her in a time loop. She must escape the hospital before the storm passes or she will be trapped in its halls forever.