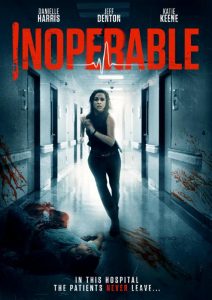 Loosely inspired by a traumatic first-hand experience in an emergency room when Hurricane Charley was fast approaching, Chapman co-wrote the script with producer Jeff Miller following their collaboration on Clowntown. Harris stars as Amy, a patient forced to battle time, nature and the paranormal, all the while desperately trying to find a way out of the hospital before she ends up trapped there for the rest of her days.

With INOPERABLE now available on DVD, Cable VOD and Digital HD, we caught up with Harris who candidly shared her experiences of shooting in one of the few remaining abandoned hospitals, how motherhood has redressed the way she reads certain scripts and just how thrilled she is that more and more woman are sinking their teeth even deeper into the genre on both sides of the camera….

SCREAM: So Inoperable is quite the mindbender. Your director/writer Christopher Lawrence Chapman has described it as “the spawn of a mating ritual among Silent Hill, Triangle, and Shutter Island” and that description is about as on the nose as they come. Was it a tough one to get your head around when the script first reached you and what particularly jumped out at you as you read it?

Danielle Harris: Well it was the first time I had done anything in a single location like that and I was in every scene, every set up, every moment (laughs) so I knew it was definitely going to be challenging. It actually made more sense to me on paper because I could break it apart. And then, when we got to filming, there were certainly moments where I’d start to get a little bit confused because you’re in it and you’re working these long hours and there’s all this stuff going on and I started to feel like the character myself where I was kind of losing it.

SCREAM: The real abandoned hospital where you shot the film must have played its part in all of that too, surely?

DH: Yeah. We shot in Tampa and my family is from Florida; originally from New York but they all lived in Florida, so I was excited to film there. A lot of the times when you take these movies you’re like, “Hmmm. Where am I filming? Is it going to be freezing? Is it going to be hot? What’s the location like? Am I going to be miserable?” So this film came around and it was going to be an abandoned space so I thought it wasn’t going to be too bad. But then I got down there and it was just, “Woah! This place is REALLY bad!” There was mould growing in the ceilings and areas labeled with asbestos and bats living in there. Having said that, it’s always nice to have a home base. Everything’s there. You know where you’re going. You know what’s going on. And I know that our DP had pre-lit the entire hospital before we even started filming so everything was already set in the ceilings which definitely helped in terms of time.

SCREAM: Apart from you appearing in virtually every scene of the movie, a fair amount of the photography looks particularly intricate and complex. There were a number of long one-shot takes and atypical camera angles. Did that pose any additional challenges for you?

DH: Actually, no. I was really excited about it all. The first couple of shots that Giorgio (Daveed) did were just oners and I remember saying to the producer, “I’m a little concerned.” Usually in a film you’ll do maybe one or two oner shots but a lot of this movie was just done with long shots. It was pretty amazing. The DP ran around with a VERY heavy camera, chasing me all over the damned hospital and managed to get everything he needed so I was very excited to see it come together. I feel like cinematography moves so fast. I’m old school and I started so long ago doing this so I find that if I take a little bit of a break and come back, everything has changed and I can’t keep up with the technology.

SCREAM: Christopher (Lawrence Chapman) openly admits that he’d never been a big fan of horror movies until recently. Was that fact apparent in terms of the directing style he brought to the table?

DH: I think for him it was just really more about the story than wanting to be part of the genre. He was really more into understanding how to tell the story because he wrote it so I felt that was more his focus rather than the fact he was excited to be making a horror movie.

SCREAM: There are some pretty visceral moments and I believe you could hardly bring yourself to look at one particularly graphic maternity theatre set piece. Was that because of how jaw-dropping the effects were or would you say it maybe had something to do with the particular moment in your life that you shot this film?

DH: Yeah, I think we were definitely trying for a baby around that time and in my whole career I had never actually seen a scene like that. It’s much easier to see someone have a fake neck slit or something like that. It’s like watching a dog die in a movie, you know? You’d much rather see a person impaled or bludgeoned to death than you would see an animal or a child being harmed so I think that whole visual was just like “Woah. This is way too intense for me.”

SCREAM: I used to go and watch horror movies with my wife all the time but then, as soon as we had our first child, she suddenly couldn’t watch those kinds of things any more. Is that something you can relate to at all now that you have had your first child? 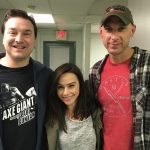 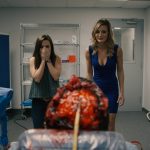 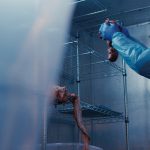 DH: Sure. I definitely read scripts in a very different way than I used to and there are things that I just can’t do any more. I’m still that Mom that can get down with horror movies but I think something definitely just shifts and switches on. It’s got to be a hormonal thing that just changes your perspective I guess. The nurturing side of you just kicks into high gear and that makes it kind of harder to watch these horrible things happen to people.

SCREAM: Talking of scripts, you have a couple more horror movies brewing? The Joe Dante-produced Camp Cold Brook definitely has me intrigued.

DH: I do. We finished that one early Fall and we’re actually going to see a screening of that in about 2 weeks. I love Joe Dante and I’m also a big fan of the director, Andy Palmer, and I felt like it was a chance to play a character I hadn’t played before. She’s fun and sassy and has a great sense of humour and we got to film in this camp in Oklahoma which also appealed to me because I’d never done a movie in a camp like that before. It’s not your typical slasher film. I think I’m trying to find things that are a little bit different from things that I’ve done in the past.

SCREAM: I hear romantic comedies wouldn’t be out of the question for you either.

DH: Oh YEAH! I would do a romantic comedy in a second! It’d be like a vacation for me considering how hard these horror movies are most of the time. I would love to do a Rom-Com or a drama or anything. I just like working. I love horror movies too, of course, and the fanbase is pretty amazing, which is why I keep doing them.

SCREAM: Just to finish off. It’s Women in Horror Month and I understand you recently had a bit of a get-together with a plethora of influential women in the genre such as Barbara Crampton, Amanda Wyss and Brea Grant, to name just a few.

DH: We did. It was pretty nice to be able to plan it and get together with all the ladies. I mean, I see a few of them here and there at signings but we’re all so busy that it’s just so hard for us to get together and just talk about what’s happening in our genre. And we are a league of our own. It’s a very different world for us, especially now with what’s going on with this amazing movement. In a lot of horror movies the males are the leads and there are a lot of tits and ass and, unfortunately, we see a lot of sexuality and a lot of things that are expected of women in horror. But, thank God that has shifted a little bit over the years and we’re also seeing more female directors. That’s exactly what needs to be happening; especially because women are the leads in all these movies. I mean, WE ARE the final girls so it’s odd to me that there have been so few female directors directing women who are leads so I think it’s time for a change…

Inoperable is out now on DVD, Cable VOD and Digital HD.