If Drop Dead Fred was filtered through the surreal and emotional lens of Jacob’s Ladder, you’d have Daniel Isn’t Real, the sophomore feature of Adam Egypt Mortimer.

The film is based on the novel In This Way I Was Saved by Brian DeLeeuw, who also co-wrote the script with Mortimer. The plot centres around Luke (played initially by Griffin Robert Faulkner) who, after witnessing the bloody aftermath of a mass shooting, encounters a new friend that no one else can. That friend is Daniel (initially played by Nathan Chandler Reid), a charismatic child who boosts Luke’s confidence at a difficult juncture in his life. But when their fun and games take a near-lethal turn, Luke’s mother (Mary Stuart Masterton) banishes Daniel to the dollhouse, and Luke moves on with his life.

Years later, struggling to cope with his mother’s worsening schizophrenia and concerned that he’s starting to exhibit symptoms, Luke (now played by Miles Robbins) is advised by his therapist (Chukwudi Iwuji) to reconnect with his childhood imaginary friend. Luke is delighted to learn that Daniel (now played by Patrick Schwarzenegger) has aged alongside him, and the pair’s friendship seemingly picks up where they left off, with Daniel becoming the perfect wingman. But as some violent and possessive habits start to resurface, Luke becomes concerned that Daniel is very real indeed—and he isn’t willing to take a backseat anymore. 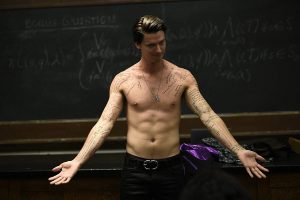 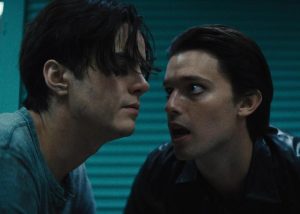 Some trippy visuals and grotesque practical effects gore set-pieces ensure that Daniel Isn’t Real will be an instant hit for most horror lovers. But a film like this lives and dies on its central performances—and luckily, neither of the leads disappoint. Robbins is solid throughout as our sensitive and fragile hero, but he really gets a chance to shine in the scenes where Daniel has taken control. Schwarzenegger is especially captivating, channelling a Patrick Bateman-esque energy that makes him extremely watchable and yet somewhat off-putting in every scene he swaggers through.

Their intense and parasitic relationship is approached with a great deal of nuance, and even knowing from the outset that Daniel is dangerous, like Luke, we can’t help but get suckered in. Luke isn’t stupid for letting Daniel draw him down the alluring path that ultimately leads to radicalisation and loss of self. Like a lot of young men facing similar issues in this crazy age we live in, he’s just lost. It’s a theme that isn’t explored enough, both in horror and film at large, and its fascinating and disquieting to watch it play out.

Where the film stumbles, unfortunately, is in its treatment of one of its other central themes: mental illness. Masteron’s portrayal of schizophrenia is deeply empathetic, as is Luke’s fear of becoming like her. But his solution to his Daniel-sized problem feels remarkably misguided on the part of the writers, and it may leave a sour taste in the mouth for many viewers—particularly for anyone dealing with mental illness themselves. 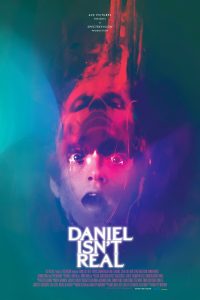 Nothing is entirely off limits in horror, so it feels wrong to say the film shouldn’t have ended the way it does. But considering that the last 15 minutes feel unnecessary anyway, telling the audience things we’d already intuited on our own, it’s especially galling. Perhaps Mortimer didn’t want to end on a somewhat predictable but still satisfying note. Or perhaps he didn’t want a downer ending. Either way, what he wound up with feels like it’s telling us its positive and satisfying—but the implications just make it seem ill-judged.

Putting the rocky conclusion aside, Daniel Isn’t Real is a startling second feature from a filmmaker who’s going from strength to strength. Seek it out when it’s released on December 6th—but maybe shut it slightly before the end credits roll.