Danai Gurira to Possibly Star in Godzilla vs. Kong 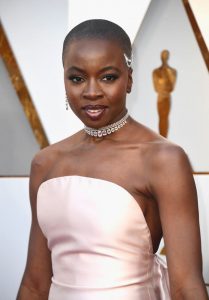 Danai Gurira is in early talks to feature in the upcoming Godzilla vs Kong; so, she’s not quite confirmed to star, but she could (and hopefully) will be soon.

You’ll probably recognise the actress from her role as Michonne in The Walking Dead, but she has since portrayed Okoye in Black Panther and Avengers: Infinity War. She is also set to star in the currently untitled sequel in the new Star Trek universe.

Godzilla vs. Kong will be directed by Your Next and Death Note’s Adam Wingard, whose film will follow Michael Dougherty’s (Trick ‘r Treat) Godzilla: King of the Monsters. That one will hit our screens on 19th May, before Godzilla vs. Kong lands on 22nd May 2020.

Godzilla vs. Kong already stars Millie Bobby Brown – who is also in Godzilla: King of the Monsters and Deadpool 2’s Julian Dennison.