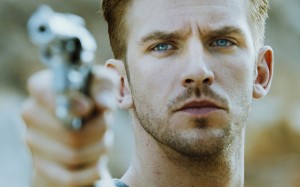 Nacho Vigaolondo’s (Timecrimes, Extraterrestrial) monster movie Colossal is currently in production in Vancouver and the cast announcements just keep on coming. The latest actor to land a role in the film is Dan Stevens (The Guest) and he joins Anne Hathaway, Jason Sudeikis, Austin Stowell and Tim Blake Nelson. Stevens will play Hathaway’s ex-boyfriend who fights to get her back; probably because the massive creature tormenting the city causes a rush of forgotten feelings to re-emerge -how sweet!

Synopsis:
The story follows a woman who moves back to her hometown after losing her job and boyfriend in New York, only to discover that she is somehow strangely connected to a giant creature that has materialised over Seoul and is wreaking havoc on the city.

The blend of drama, action and monster-horror sounds refreshing and we can’t wait to see what Vigalondo does with a monster flick. He has already cemented himself as a unique director who has managed to explore space and time, all within a horror setting. His segment in VHS: Viral could be described as the best, if not the most mind-boggling of them all.