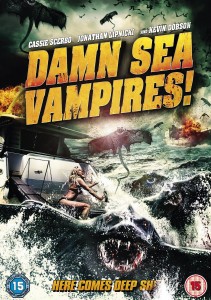 Synopsis:
Brother and sister, Donna and Joe are dredging for gold beneath the infamous waters of the Bering Sea when they’re faced with a bloodthirsty horde of sea vampires. With their father already dispatched by these amphibious fiends, they find themselves teaming up with a dedicated marine biologist and a loyal deck-hand in a fight for survival.

No doubt swayed by the staggering popularity of the Discovery Channel’s DEADLIEST CATCH, SyFy decided the lure of setting one of their infamous creature features in the choppy currents of the Bering Sea was too good an opportunity to overlook. With the requisite trans-Atlantic title-change in place; BERING SEA BEAST becomes DAMN SEA VAMPIRES! – complete with an on-screen title card you’d associate more with an early version of MS Word; the scene is set for some aquatic mayhem.

Opening with jarring stock footage of a collapsing ice shelf, it only takes a minute to get back into the groove of the schlocky conveyor belt of SyFy Original Features. Given a sneering look of dismissal by the majority of genre critics, I still love these cheapjack pieces of disposable schtick; be it for their knack of extending the careers of former child actors and faded TV stars, or for just balls-out attention seeking titles like RAGIN CAJUN REDNECK GATORS. Jonathan Lipnicki is the former child star du jour in DAMN SEA VAMPIRES!, and following his lisp-laden period of cherubic success in JERRY MAGUIRE, STUART LITTLE and MY LITTLE VAMPIRE, his career failed to successfully bridge the gap into adulthood. Today he’s more obsessed with MMA than acting, but he delivers a decent performance here, and with co-stars pulled from soap-land in Brandon Beamer (THE BOLD & THE BEAUTIFUL) and Kevin Dobson (KNOTS LANDING), not to mention SHARKNADO’S very own Cassie Scerbo, the casting is actually pretty energetic and engaging.

Behind the camera we have Don E. FauntLeRoy, the cinematographer (JEEPERS CREEPERS) and occasional director (TODAY YOU DIE) who manages to successfully integrate what can at times be notoriously discordant CGI into key action sequences. That’s not to say the CGI is a raging success – for the most part it’s likely to elicit a snigger of pity at these stingray-like Sea Vampires who seem wrapped in latex. Add to this a script that seems to have been written by pulling random former SyFy script lines from a tombola and assembling them back together in no particular order, and we have all your typical SyFy Original ingredients.

Most reviews of these pictures tend to be content with dusting down and trudging out the predictable tired analysis of “you know what to expect” and “so bad, it’s good”. Fact of the matter is, in 2014 you’re unlikely to convert any new fans to these relentlessly produced low-budget creature features, and similarly the mere sound of the title will elicit a moan of disdain from the haters. If however you are part of that committed army of b-movie cheese aficionados, then this piece of trash will excite and delight in equal measure.