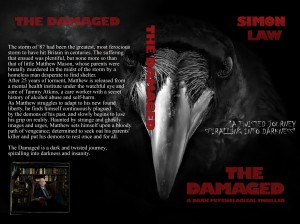 A good psychological thriller should be traumatising. When a story has the power to make the reader understand the viewpoint of the characters – especially those of a fractured mind and perception – then it makes for an effective, harrowing experience. Granted, a good story and engaging writing is just as important; but accomplishing a deep-rooted understanding of disturbing human behaviour is the key ingredient to sending a chill down the spine. Darkness resides in all of us, and Simon Law’s The Damaged does an excellent job of creeping its way into the corridors of our mind we keep hidden from the rest of the world.

The Great Storm of 1987 was one of the most violent in the UK’s history, leaving much of the country damaged and in disarray afterwards. The story begins on that fateful night in Sussex, England, as young boy named Matthew witnesses his parents murdered at the hands of a vagabond seeking shelter. 25 years later, he’s released and paired with social worker Tammy, who is harbouring her own personal troubles. However, when Matthew stops taking his medication and starts experiencing hallucination, his desire for retribution is unleashed, along with the demons of his past.

Matthew and Tammy are both beleaguered by the traumatic experiences of their pasts, and Law doesn’t shy away from portraying damaged psyches to the full extent of their turmoil. Through Matthew, the Freudian Oedipus complex theory Is manifested through his delusions, while also touching on post-traumatic stress disorder. Despite being a very dark story, there are tender, optimistic moments to be found: these are evident through the unlikely bond between the central characters, which goes beyond that of a carer and her patient. Law does an excellent job of making us care about these people, which makes their plight an emotionally hard-hitting one to endure. The menace bubbles under the surface throughout, gradually gaining traction until it finally bursts through the seams – and when it does, it’s often terrifying. 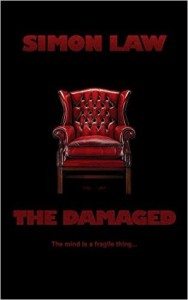 We’re never given a full understanding of Matthew’s actual medical condition, but the lack of explanation ensures a constant air of mystery throughout which allows us to make up our own minds. In Tammy’s case, we get to know a character weighed down by her own guilt. Handling such complex and sensitive themes is a weighty task, but Law approaches them with respect and care, never crossing over into the realms of schlock and exploitation without a reason to.

The Damaged can also be interpreted as a parable about the British political landscape – then and now. In no way will it bog down the reader with political commentary to the point of alienating different viewpoints; but it does pose some thought-provoking questions in relation to class divisions in our society at times. Overall, it’s a challenging but extremely rewarding read with horrific elements aplenty – and the underlying love story of two outsiders coming together to overcome grief is actually pretty touching.