A new character poster has been unleashed for the upcoming Suspiria re-imagining and it puts the film’s star Dakota Johnson at the forefront. The poster tells us to ominously give our souls to the dance, but I’d rather not. 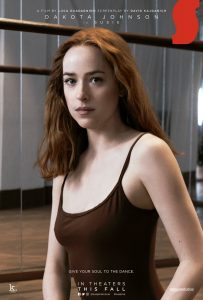 With this and Gaspar Noe’s Climax set to arrive this year, we’re in for a couple of – hopefully – terrifying dance-centred horrors. And how often can we say that?