CW have announced that they are to adapt 1987 ‘Brat-Pack’ vampire classic The Lost Boys into a series, with Veronica Mars and iZombie creator Rob Thomas reportedly acting as showrunner.

Directed by Joel Schumacher, the original film starred Corey Haim and Jason Patric as two brothers who move with their mother to the small coastal town of Santa Carla, where all the coolest parties are thrown by the local vampire population. It also starred Corey Feldman, Dianne Wiest, Alex Winter and of course, a heavily-mulleted Kiefer Sutherland.

The story, and Santa Carla itself could easily lend themselves to any number of tales, but unfortunately all that followed were two lousy, straight-to-video sequels (Lost Boys: The Tribe in 2008 and The Thirst in 2010) that failed to capture the mood, tone or quality of the original. A TV series then, is a rather exciting prospect indeed. 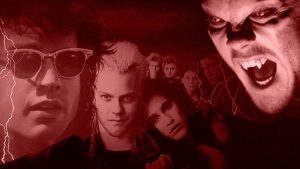 Clearly confident in the idea, CW is apparently eying the show for a seven-season run, with each season taking place in a different decade. The first is to take place in the ‘60s, with each subsequent season taking us closer to the present day. With vampires’ habit of not aging, this poses no problem when it comes to recurring characters, of course.

Expect much, much more on this as we get it.