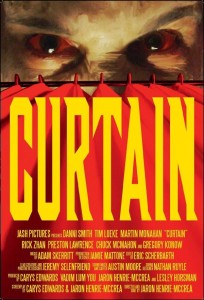 Synopsis:
When Danni (Danni Smith) moves in to a new apartment she notices that her shower curtains keep disappearing. With the help of her co-worker she sets up a video camera to catch where they’re going; obviously, they’re going through a mysterious portal that is the gateway to unimaginable terrors.

If you aren’t immediately intrigued by that peculiar concept then you may as well stop reading now. The only way you are going to enjoy this film – and agree with my 4-star stamp – is if you can embrace its madness. The best way to describe Curtain is as a zany trip. It’s as bizarre as its title suggests and is all the more wonderful for it. The commitment to its tale of strange terrors is what makes it so watchable and impossible not to journey along with. If you love your horrors to be equally as funny, scary and downright mental as possible, then Curtain is definitely the film for you.

Curtain begins as it means to go along as it sets its mysterious and unsettling tone. We are greeted with a man who seems to be losing his mind as he ventures home to his apartment. The camera perfectly pans up to the top of the building, serving as a great hint for the terrors that are waiting inside. This feeling of unease is carried throughout this opening sequence as the man mutters indecipherably. Apart from his muttering, it is deadly silent. The menace is furthered as a sweeping shot of his apartment then cuts to a towering image of his bathroom door which has been taped shut. By taped shut, I mean really taped shut. Like, nothing is getting through that door any time soon. It’s a great little sequence that wonderfully encapsulates the madness of the man; who has, assumedly, been driven to the edge of his tether, because of his curtains. It, also, hints at what’s to come and acts as a great set-up for the rest of the film as it gets beautifully madder and madder as it goes along.

It may have a seriously bizarre concept, but there is a certain level of seriousness within Curtain that prevents it from being labelled as a comedy. The two main characters in Tim (Tim Lueke) and Danni themselves are grounded in reality, both trying to accomplish their dreams, but being held back by social anxieties and, overall, fear. In order to get over this fear, they must face something far scarier than helping to save the whales; as they are drawn in to a horrifying reality that is, quite literally, filled with monsters. Curtain has some much-needed moments of comic relief – mainly within Tim’s whale saving-obsessed character, but Curtain is a surprisingly sincere horror effort. Proving that you can have a ridiculous plotline at the centre with a coating of genuine fear and a central story many can associate with; Curtain has many dark moments that will leave you a tiny bit frightened. One particular scene sees the introduction of Willy (Gregory Konow) who is, to put it simply, a bit of a nutter. He takes Danni and Tim on a trip to a swamp to help them solve the mystery of the missing curtains, and commences to go on a tangent about a mysterious ‘Frankie’ and gets a little mad with some spray paint. If the execution of this scene wasn’t so damn creepy, it’d almost be funny. That is the wonder of Curtain. There is a commendable achievement in its ability to turn something that, on paper, would be downright hilarious, into something unflinchingly demented and quite terrifying.

When the film enters its scenes that are particularly crazy, there is a jarring alteration in the way it’s shot. Moments of calm are typically captured in back-and-forth medium shots with the odd slow-zoom. When the madness begins, the camera captures the crazy in low, canted angles and extreme close-ups which heighten the lunacy and emphasise the confusion felt, not only the characters in Curtain, but us the audience. Curtain opts for projection shots that are reminiscent of those featured in Sam Raimi’s Evil Dead, working well to mirror Evil Dead’s fantastic ability to bring its evils to life with the camera. Much like Raimi, Jaron Henrie-McCrea succeeds at giving the horrors behind the curtain a perspective and constant presence; they’re either constantly lurking in the characters’ minds or physically brought to life on-screen. The music also sinks in to the mania as it adopts an electronic pulse that marks an effective contrast to the long, natural silences that occupy much of the film. The sound that is set to the hidden portal is bizarrely brilliant; cementing Curtain as a gem of a film that wishes to embrace as much surrealism as possible, without crossing that thin line that leads straight in to nonsense. 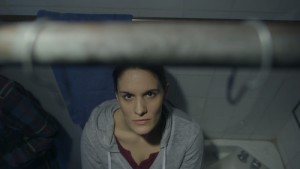 Curtain really is a great little treat of a film. It’s an unforgettable rollercoaster journey that has its own unique identity, but also manages to pay homage to ‘80s schlock. Without being too silly, it grounds its story in reality and uses the bizarre world behind the curtain as a metaphor for much more real, social problems. I urge you to jump down the rabbit hole and enjoy the horror goodness that Curtain has to offer, because the world really needs a bit more mad joy.