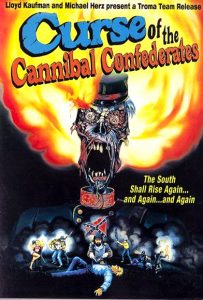 Synopsis:
A group of friends go on a camping trip in the woods. As they wander about the surrounding area, they come across artefacts from the civil war. When one of them absconds with an old diary, ghosts of confederate dead come to life to terrorise the group.

Some bad movies are inexplicably enjoyable. Critics and audiences often describe them, as ‘so bad they’re good.’ There’s always going to be appreciation for enjoyable faults and unintentional comedy. However, sometimes a movie is just bad, and sitting through it feels like a chore. That’s the case with Tony Malanowski’s Curse of the Cannibal Confederates. A remake of one of his earlier films, Night of Horror, it’s one of the many titles released through Troma studios. While one might not have high expectations from the renowned schlock factory, an entertaining experience is expected to say the least. Unfortunately, it’s 90 excruciating minutes you won’t be able to get back.

The story itself is familiar to just about every horror fan. A group of young adults head off into the wilderness and stumble upon an old burial site. One thing leads to another, and the dead rise to exact revenge upon the living. In theory, this whole endeavour should be executed rather well. However, there are some important factors missing. The first is the lack of acting talent from the cast. They stumble about their lines, attempting to deliver them as best they can. Only a few of them seem believable, and the rest lack the ability to project any sincerity. Although acclaimed thespian talent isn’t required for a low budget zombie flick, it’s important to at least try.

Many of the scenes involving the cast bring new meaning to the words ‘haphazardly grouped together.’ As with any low budget production, it’s easy to overlook inconsistencies and poorly structured shot composition. That being said, Cannibal Confederates features some of the worst scene transitions. Many are obviously filmed during different hours of the day, and slapped together in an attempt to establish continuity. Many times characters are shown “talking” with one another in scenes that weren’t filmed with both actors present. More than once, an actor will be speaking in broad daylight, and someone will answer them in a scene that was shot during nighttime. The horrific ‘cut and paste’ editing is laughable, and incredibly distracting.

Arguably the most painful aspect of the movie is its laborious pacing. The slow-burn technique, when utilised properly, is a great way to build suspense. It’s so tedious here that maintaining interest is next to impossible. The entire effort is drawn out for far too long, and padded out shamelessly to extend an unnecessary running time. If someone asked what the movie is about, ‘an hour too long’ would be a justifiable answer. 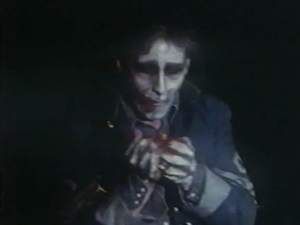 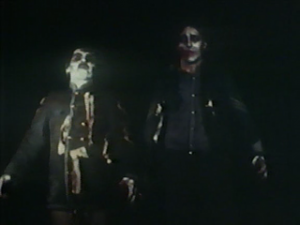 Throughout the years, the zombie has taken many forms and possessed several different appearances. Their look is comprised of poorly applied white face paint and uniforms that aren’t entirely convincing. As they begin to terrorise the camping expedition, a shotgun comes into play to help ward them off. Once again, the cut and paste editing makes an appearance, with scenes of the gun firing, but no damage being visibly shown on screen. A cheap practical effect is spliced in, showing a papier-mâché head burning and then falling over. This same shot is repeated three times, showing up at random during the onslaught. The onscreen violence is kept to a minimum, with only one feeding sequence that’s just as slowly paced as the rest of the plot. The abysmal lighting doesn’t work in help, as their dark uniforms make them hard to distinguish. Their white make up also gets illuminated to the point of distraction.

Although fans of bad movies might enjoy this one, it’s safe to say that few others will. If you’re planning on having a bad movie night in the foreseeable future, Manos: The Hands of Fate will be a far better option. This is one zombie flick that should have stayed buried.