There’s not much better on Halloween than settling down to watch some classic horror, so I thought it would be an appropriate time to take a look at Danny Peary’s Cult Horror Movies: Discover the 33 Best Scary, Suspenseful, Gory, and Monstrous Cinema Classics. The author is a film critic who has a series of these Cult Movie books spanning a variety of genres. Most of the horror movie books I read are written by avid fans, and focus solely on that, and so I thought it might be a bit different to read what someone less obsessively focused on the horror genre wrote.

The 33 movies are not ranked but listed alphabetically and it is a pretty diverse selection that the author has chosen. There are some horror movies that you’d expect to see and it would be criminal for those not to be included, so you do find The Texas Chainsaw Massacre and Halloween. For the most part though, this is not the usual suspects, which was particularly refreshing. This is especially true concerning certain films that so much has been written about that it’s hard to find new facts and stories. Some examples of these less visited films are Massacre at Central High, The Conqueror Worm and Peeping Tom. There are some titles that I disagree with him on and would definitely not have included. It’s debatable, well more than debatable, to say that King Kong is horror. The focus of this book is more on the classics with the majority of movies on the list released prior to 1970. 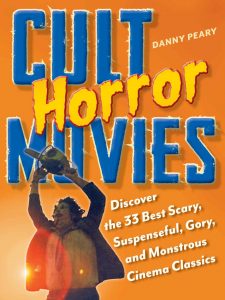 Each movie entry begins with production information and the cast, followed by a synopsis and Peary’s essay on the film and what makes it a cult horror movie. Each film discussion includes black and white production stills and screen images. (Not the best quality, but not a big deal). The success or failure of this kind of book all rests on the quality of the writing, and thankfully the writing is engaging and entertaining. There are interesting discussions by Peary and he is quite opinionated. I found lots that I disagreed with, but that’s a good thing. You can’t fault someone for their opinion.

Two of my favourite films are covered and I relished reading about them – The Wicker Man and The Brood. I was and still am obsessed with David Cronenberg’s early body horror work like The Brood, Shivers and Rabid, so I found the entry fascinating. All in all this is an interesting book with its focus on much older horror movies. It’s well worth a read, especially if you pick up one or two of these movies for a Halloween treat.