If there’s ever a horror franchise that has always sought to do something new with each instalment then the first one to pop into my mind has to be Don Mancini’s Child’s Play. Now going on for almost 30 years with no signs of slowing down, the franchise is back with its seventh instalment Cult of Chucky which gives the franchise an interesting twist that you won’t see coming! 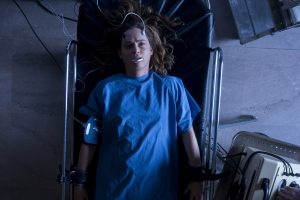 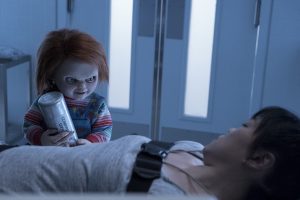 Picking up four years after the events of Curse, Cult of Chucky catches up with Nica (Fiona Dourif) who has been convicted of the murder of her family and put under the care of doctors inside a remote asylum. During her treatment, she has been convinced that Chucky is a figment of her imagination. However, when her doctor introduces a good guy doll as a means to help her recovery it’s not long before bodies begin to pile up. Having to face her own mental state Nica realises that Chucky is very much real and he’s back to get his revenge.

Now what I love most about the Child’s Play franchise is its ability to reinvent itself with each instalment. Fans of the franchise have seen it morph from a straight-laced child-in-peril thriller to a deliciously self-aware slasher. The same stands for this one too, taking influences from such films as A Nightmare on Elm Street 3: Dream Warriors and Over the Cuckoo’s Nest, Cult is a largely self-contained psychological slasher. As director, Mancini uses the setting of the asylum to add even more darkness to the film with themes of malpractice and abuse of power. Meanwhile Cult still manages to successfully balance its serious moments and it’s unique sense of humour that the franchise is famous for.

As you can imagine there is a lot of fun to be had even if the pacing of the film was much slower than I had first anticipated. There are a few surprises along the way and it’s always a pleasure to see Jennifer Tilly on screen. Speaking of which, the cast is fantastic. Fiona Dourif is once again excellent as Nica. Unlike the last film, Douriff’s character goes through some incredible changes and this gives her the opportunity to demonstrate her versatility as an actress. Meanwhile, Jennifer Tilly and Alex Vincent return as Tiffany Valentine and Andy Barclay. Both characters have had their own involvement with Chucky in the past and although relegated to secondary characters in Cult, there’s no denying that it’s great to see them both on screen playing their most iconic role. 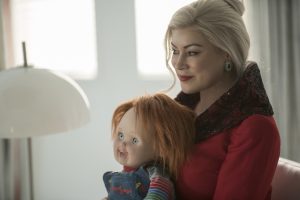 As a whole, Cult of Chucky is a fun film and Mancini has delivered another enjoyable instalment that not only expands the mythology of the franchise but it breathes new life into it changing where the series will go next. So by the time you see multiple versions of Chucky on your screen at the same time and an unexpected after credits scene, there’s no doubt you’ll want to see another instalment in the Child’s Play franchise.