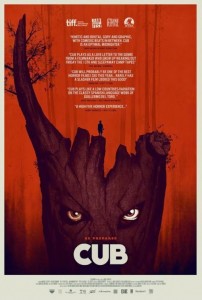 On a group trip, a troupe of Belgian cub scouts loses its way in a forest. The scout leaders try to keep up morale with a campfire tale regarding Kai, a werewolf said to reside in the very area in which they’ve set up camp. This fires the imagination of twelve year-old Sam, a loner who is bullied by the other scouts and is the frequent target of abuse from one of the leaders. When Sam encounters a feral child, he believes he has found the actual source of the tale. Unfortunately the child isn’t alone.

First-time writer director Jonas Govaerts has hit on a potentially fecund wellspring of horror with Cub. Of course, the scenario of a group of people stumbling across an unknown threat in unfamiliar territory is a somewhat stale genre trope. What Govaerts does is to have children as his characters blundering into peril. While in most slasher flicks of this type the situations in which the protagonists find themselves are partly down to their own stupidity, in Cub the sympathy for the characters is raised by them being not only very young, but also largely blameless for the threat into which they’ve been thrown.

Govaerts and co-writer Roel Mondelaers have created a set of characters based on established archetypes. The main character Sam (Maurice Luijten) is an introvert; a troubled soul whose active imagination is the source of much of the bullying he receives. The rest of the characterisation is reserved for the group leaders. Chris (Titus De Voogdt) is a kind-hearted chap who takes his role seriously and tries to take Sam under his wing. Peter (Stef Aerts) is a sadistic bully who sees Sam as strange weakling; singling him out for torment. He has a sizable group of the scouts acting as henchmen of sorts, and they also pinpoint Sam for abuse. Jasmijn (Evelien Bosmans) is the camp cook, a young woman who acts as a maternal figure, but who also obviously ignites the adolescent minds of her charges. 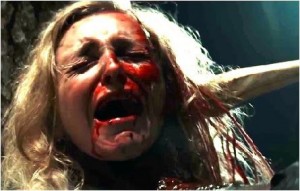 The establishment of the group dynamic is Cub’s greatest strength. It brings to mind Dog Soldiers in the skill and economy with which they’ve been sketched, and there are also liberal hints of Lord of the Flies. Much fun can also be had from spotting the genre references that litter the first act. For instance the campsite is called ‘Casselroque’ and the camp warden is a portly gentleman on a comically small motorised bicycle named Officer Franju. It’s sad therefore that it is when the main villain is revealed that the film begins to lose its way somewhat.

The feral boy Sam encounters (adorned with a creepy, pagan mask made of bark) is the son of a malevolent poacher who has scattered elaborate Rube Goldberg-style traps around the forest and who targets the trespassers mercilessly. When the violence is triggered, Govaerts somehow manages to both push the expected boundaries and to not go far enough. Punctuated by another wonderful Carpenter-esque synth score by Steve Moore, who did such great work on The Guest, the tension is ratcheted highly and the deaths depicted are unstinting in the gore stakes. However, it’s a little squeamish when it comes to the fate of the children, showing coy discretion when it could have gone for gleeful Battle Royale operatics. Even The Hunger Games is more direct in its child slaughter.

That said; it is with the journey of Sam that the film succeeds in disturbing. It’s a great performance from young Maurice Luijten, ably depicting the blurred boundary between the innocence and violence of childhood. Excluded from his peers, it is in the mute, animalistic Kai that he finds a kindred spirit. It is this volatile, and ultimately fateful, affinity between the two children that rescues Cub from becoming somewhat listless, despite its lean eighty minute runtime.