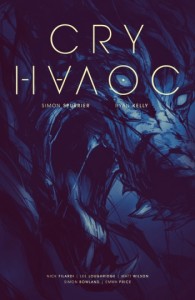 When I first read about Cry Havoc, a new series about lesbian werewolves in Afghanistan, I have to admit I was a little sceptical. Werewolf stories have been done to death over the last few years, and I was expecting to read a series that felt both exploitive and misogynistic. Fortunately, the first issue of Cry Havoc establishes a powerful, intriguing story about feminine power and the destructive urges inside all of us.

The plot, which takes place in three separate time periods, is centred around musician Louise Canton. After being mauled by a werewolf in central London, she flees to the Middle East to become a huntress for the military. The story is set in the immediate aftermath of being bitten, during her time serving as a mercenary in Afghanistan, and somewhere in the future, where Louise is, presumably, a prisoner of war. Though this mode of storytelling could easily become confusing, three separate colourists provide distinctive looks for each section, making it easy to differentiate between them. Artist Ryan Kelly ties the whole book together, creating a story that flows organically, in spite of the non-linear narrative. 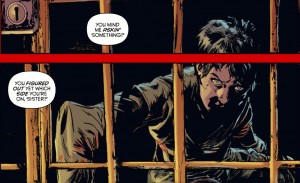 Writer Simon Spurrier is proficient at writing believable dialogue, with Lou’s relationship with her girlfriend providing the emotional centre of the first issue. Unfortunately, the same can’t be said for some of the minor characters in the story – such as army leader Stig, or the mystical outcast Adze – but since this is only the first issue, Spurrier has a lot of room to flesh out these characters beyond their formulaic introductions in futures issues.

Overall, the first issue of Cry Havoc is a compelling addition to the wealth of comics about werewolves, and if Spurrier’s annotations in the back of the issue are anything to go by, this series is definitely one to watch in the coming months.