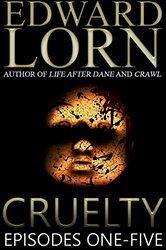 Cruelty is an epic horror serial by Edward Lorn, the first episode was originally released in January 2014 and the next four followed in rapid succession. The writing was crisp and flowed majestically, there was a great amount of depth to this story, coupled with some truly memorable characters and I for one was hooked.

The author then underwent surgery and physiotherapy from a crippling back injury, suddenly he was out of funds and the remaining five episodes lay unedited, waiting. To get the last five episodes released, he launched an Indiegogo campaign where contributors could back the project and secure rewards. Well I was one of the backers and my reward a memorable death scene, my name there for all to see as my head gets rather violently separated from the rest of my body (episode 7 if you’re interested).

Episode 10 is finally upon us and although there’s been substantial gaps between episodes, this story and the characters are difficult to forget, it’s just like you’ve never been away. If you try Cruelty you’re lucky in respect that there’s no wait, if you like episode 1 then get the two omnibus novels, 5 episodes in each and over 600 pages of creepily addictive reading.

I won’t review every episode but give you more of a taster to the sort of things you can expect. Cruelty, although it feels much longer takes place over a slither of time, a mere 36 hours but there’s a hell of a lot going on and a number of characters. Not all of them survive, in fact not many of them survive but each one is memorable in their own way.

Will’s car just broke down but a bigger concern is the prostitute digging a gun into his ribs as they walk to town, he should have “headed on home for a cold shower or a rigorous coupling with Sally Palmer and her five sisters” but no he didn’t, being a typical 19 year old he wanted more. He’d got Jennifer’s address from his roommate Kirk and she was recommended, right up to the point she disappeared, crumpled as a car literally swept her away.

This sets in to action a chain of events that are both violent and totally mesmerizing. The car stops and the most distressing thing Will has ever seen waddles towards him, smiling. This story has demons, two drug dealers called Twon and Ollie that add violence and humour, a multitude of law enforcement officers and from a horror angle some of the most disturbing characters around. Cruelty, Forgiveness and Regret are real and you’ll witness the trauma and devastation that each can bring and the only question. How can you possibly stop it?

Edward Lorn writes stories the way I would if could write, a prose that means you literally can’t skip a word for fear of missing out, he brings character depth to the table almost unnoticeably, you suddenly without awareness feel you know someone and you desperately need to see what happens to them. Coupled with an enthralling plot, from the start you feel like you’ve stumbled onto something immense and unquestionably riveting, this is horror done right and done exceptionally well. Highly recommended and not just because I’m in it.