I picked this up looking for a quick read. I’d read Rollo’s Jigsaw Man and quite enjoyed that. I’ve been looking forward to reading Valley Of The Scarecrow because the synopsis intrigued me. So I thought Crowley’s Window, also by Rollo, would be a fitting appetiser. Crowley’s Window begins with a young girl born with psychic powers being ‘helped’ by the sinister Reverend Crowley. He cures the horrific visions she receives by removing her eyes. The story then skips forward a few years to when the girl, Abby Hawkins, is working as a carnival psychic.  She is unaware of her encounter with Crowley and the truth about how she lost her eyes.  A young girl is kidnapped from the carnival and later found dead with her eyes removed. When Abby tells police she saw the kidnapping in a vision and can help, they all treat her with scorn and think she is just a scam artist – except for one policeman, David. When another murder occurs at the carnival, David puts his trust in Abby’s abilities to try to track down the killer. 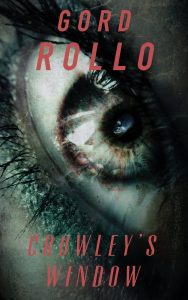 I really like the premise of this story and it starts off with a bang. Rollo does a great job with the character of Abby. She is interesting and sympathetic right from the start. It’s easy to become invested in her and the story. The immediate connection and bearing of souls between Abby and David seems a bit unnatural and unrealistic, and the romantic angle feels a bit forced. That could have been left out altogether. It starts out as a minor distraction, but annoyed me more as I continued to read. More gore and less romance in my opinion. The villain of the piece is the Reverend Marcus Crowley, and he is a nasty piece of work. If the last name sounds familiar, it’s with good reason (but I won’t spoil that if you don’t know). I would have liked to have seen much more of him and to have had his character developed a bit more – maybe show him at his diabolical work. The setting of the final confrontation is fantastic and vividly described. There are a couple of twists in the story that I didn’t see coming, including a nice cliffhanger.  The story could have been longer and more graphic building upon the strong foundations that kicked it off. I’d recommend it though – definitely worth a read.