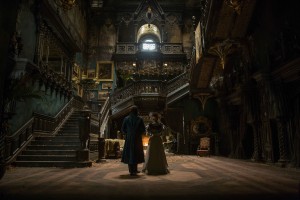 Edith has been able to see ghosts from the age of ten, after her mother’s death and it’s not long before Edith discovers that she has made a grave mistake. Thomas and his sister Lucille (Jessica Chastain) have murdered all of Thomas’ previous wives, their ghosts wandering the halls of the decaying house and she’s to be next. The Sharpe family have made their money from red clay that literally seeps through the floor of Allerdale Hall, but the mines have since started to run dry and Thomas needs to fund more technical machinery to pull the ore from the ground. The plot is basically Edith surviving, along with Thomas seemingly having a slight change of heart.

Crimson Peak is billed as a gothic horror, but I’d say it watches more like a gothic romance. The opening scene of the film is a good hook with a blood spattered Edith saying, ‘Ghosts are real, this much I know.’ 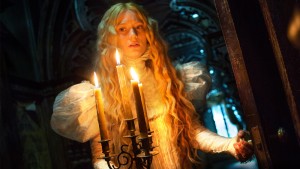 Visually it is a stunning film and with Guillermo Del Toro directing, you’d expect nothing less. Allerdale Hall oozes pure gothic architecture. Huge staircases and fireplaces are just part of it. The costumes are beautifully made and it is the costume design that gives Crimson Peak its period feel. The dark and brooding atmosphere is there throughout, and for me, period ghost stories are normally more ominous, more sinister than their present day counterparts, but I felt that the ghosts, which are all benevolent in this case; neither scared or added much to the film. The story would have been just as effective without them, as at no point did they really drive the plot forward.

What Crimson Peak does well is drip feed you with just enough suspense, enough mysticism to keep you watching and wanting to find the answers to the questions the plot asks. There is a bit of a twist and it is this twist that renders the ghosts pretty much surplus to requirements. The film does build towards the end and after maintaining a steady pace up until then, real malice is unleashed and the viewer is treated to a bloody and satisfying end.

Crimson Peak is a solid film, but could have been somewhat better in my opinion. It lacked any, ‘jump out your seat moments’, and the only thing unsettling was the look of the house and the barren environment in which it’s set. I want ghosts to chill me, but unfortunately the ghosts here made me feel nothing at all. The plot is good, and visually the film is amazing. But even with a gratifying ending, I was still left a little disappointed. Seen better, seen worse.