The Crew Are on the Xeno’s Mind in New Alien: Covenant Poster 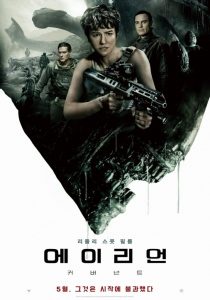 A new international poster has been unveiled for the much-anticipated Alien: Covenant and it shows that the Xenomorph has one thing on its mind: the crew of the Covenant spacecraft. Katherine Waterston’s character of Daniels is at the forefront, while the ominous David (Michael Fassbender) lurks behind.

Synopsis: Bound for a remote planet on the far side of the galaxy, the crew of the colony ship Covenant discovers what they think is an uncharted paradise, but is actually a dark, dangerous world — whose sole inhabitant is the “synthetic” David, survivor of the doomed Prometheus expedition.

We are quietly excited for Alien: Covenant, but are hoping that the film exceeds our expectations by offering an exciting, terrifying and, most importantly, an intelligent and necessary addition to the Alien franchise. With Ridley Scott promising another 4 sequels to Prometheus, Covenant will be just a mere drop in the bucket for what’s to come in the Xenomorph-ridden universe. Excited? We hope we should be!