The Crew Land in a new Image from Alien: Covenant 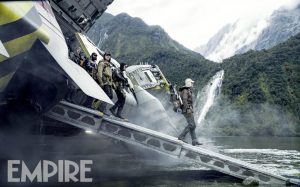 It’s not long until the much-anticipated Prometheus sequel/Alien prequel lands in cinemas and now we have a new image to share with you. Courtesy of Empire, the still shows the crew of the Covenant space craft landing on a planet to answer a distress call; but, not the one they were actully flying to. Interesting…

When speaking about the film Michael Fassbender, who plays the synthetic David from Prometheus and is also returning to Alien: Covenant, said:
“What’s great about this story is the characters are so different. They’re not just filling out a spaceship, their characters have been thought about. It harks back to those really cool characters in the original Alien, where there are great relationships going on outside of the [alien].”

The comparisons to Alien sound great, but many Alien fans were disappointed with what Prometheus brought to us back in 2012. Nonetheless, the trailer for Alien: Covenant looks pretty badass and really showcased the film’s horror side. The horror in Alien is an important aspect and one that was sadly lacking in Prometheus.

Our fingers are crossed for a new, fantastic addition to Ridley Scott’s Alien world when Alien: Covenant lands in cinemas on 19th May 2017.