We’ve been very excited to learn of a sequel to 2014’s delightfully chilling Creep and now we know what date the film will be with us. Creep 2 will arrive on digital platforms – ie Netflix – on 24th October 2017; just in time for the spookiest time of the year. With Stranger Things, iZombie and Black Mirror returning to Netflix this Halloween, as well as the big studio releases of Jigsaw, Blade Runner 2049, mother! and The Snowman, it’s shaping up to be an exciting October 2017.

To get us even more exciting for Creep 2, the full synopsis has been released and it is as follows:
Creep 2 stars Desiree Akhavan as Sara, a video artist whose primary focus is creating intimacy with lonely men. After finding an ad online for “video work” she thinks she may have found the subject of her dreams. She drives to a remote house in the forest and meets a man (Mark Duplass) claiming to be a serial killer. Unable to resist the chance to create a truly shocking piece of art, she agrees to spend the day with him, but discovers she may have dug herself a hole from which she cannot escape.

You can also check out the first image from the film, which shows Mark Duplass looking quietly creep-y. What’s that he’s holding? 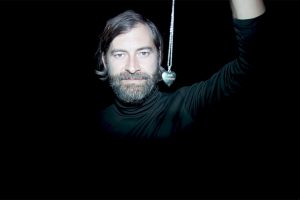