THE CREATURE BELOW: Film Review

Getting straight to it with opening scenes so rapidly cut together you’ll think you’re watching the trailer, British monster mash The Creature Below certainly starts with a bang, if not a particularly well staged one. Ambitious diver Olive becomes the first to use a brand new exosuit which allows the wearer to reach depths never before explored. During the inaugural dive, Olive encounters a giant, tentacled creature that attacks her, before she is rescued by her crew onboard a research ship.

The sequence employs some bargain-bin CGI, lending the scene a cartoonish quality that could be forgiven were this the intent. In a film as stony-faced as director Stewart Sparke’s feature debut however, it very soon becomes clear that any self-aware, SyFy Channel silliness is most certainly not on the menu. Thankfully, the director opts for practical monster effects for the bulk of the story.

Olive barely survives her dive, but gets no sympathy from mission leader and designer of the exosuit Dr. Fletcher, who promptly fires her from his team, five days before they are due to return to land. Pissed off and looking for answers (she has no memory of the dive), Olive inspects the trashed exosuit and finds a weird, ink-covered egg in the breached oxygen cylinder, which she takes home with her when she returns from the 5-month research mission. Hidden from Olive’s boyfriend Matt in her basement study, the now-hatched creature develops a psychological hold on Olive, threatening her sanity and eventually, the lives of those around her.

The Creature below channels Alien and Andrzej Zulawski’s Possession, but falls woefully short of such masterpieces and indeed, a number of their low-budget variants. The main issues lie in the film’s wildly uneven pacing and structure, which see key plot developments rushed through and long, dragged-out sections with little relevance. Shortly after bringing the creature home, Olive gets a face-full of its ink and by the very next scene is shoving food down her gullet like a wild dog and acting outwardly hostile towards Matt. What should be a gradual transformation as the creature’s influence grows is pushed right into the viewer’s face within the space of one scene. Matt’s response only adds to the ludicrousness, as he displays a mid-level puzzlement towards Olive’s behaviour, when all-out fucking boggle-eyed bafflement would be far more proportionate a response.

What happens in the basement stays in the basement it seems, and the inevitable victims that Olive must bring the creature are bloodily dispatched with no blink from the world outside. The enjoyably rubbery creature feasts on anyone unlucky enough to find themselves in the basement, leaving an unrecognisable corpse which Olive presumably does away with somehow, although we are never made privy to it. The use of a basement as the scene of Olive’s sinister activities nicely backs up the film’s title, giving Olive another ‘below’ once she has returned home from her diving adventure. It also brings up themes of the subconscious and of Olive’s barely contained id. She is someone who craves excitement and as soon as she returns to her like-any-other suburban home and conventional relationship with a somewhat drab boyfriend, it is made clear that both the basement and its bloodthirsty resident represent suppressed desires. This use of the basement provides some depth which – perhaps surprisingly, given the film’s opening gambit – is sorely lacking elsewhere.

The film’s atmospheric and sombre score is another plus, and there are some nice visual touches, with the bland, naturalistic and when required, clinical lighting of the house’s various rooms contrasting with the dark greens and blacks of the basement to further display the flipsides of Olive’s character. 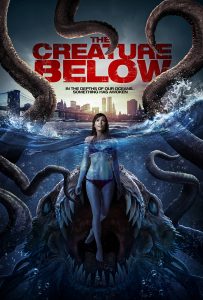 The Creature Below has aspirations of being an emotionally-driven character drama within a monster movie skin but the relationships, characters and dialogue fail to convince enough to pull it off. The film takes itself far too seriously for what it is, and could have overcome certain failings were it to embrace a little creature feature silliness. As it is, the ropey CGI is glaring and ill-fitting, and the film simply cannot be allowed to get away with introducing a character said to be “nearly 90”, but who is played by a woman who looks barely 55. There’s a nice little bit of subtext and Olive’s tentacled companion looks pretty good, with director Sparke careful not to show too much and spoil the illusion. The same cannot be said for the CGI-heavy scenes, where a little restraint would have gone a long way. In many ways the film hits all the right beats, it’s just that those beats are so haphazardly botched together that it fails to captivate, and you’ll find yourself yawning way before the admittedly enjoyable (if brief) payoff. A payoff which, true to form, is followed by a groan-inducing epilogue.