A crazy trailer has been unveiled for Lowlife and it barely scrapes the barrel of the violent madness that ensues during the film’s 96-minute runtime. We caught the film at last year’s FrightFest and thought it was a brilliant, mental, surprising and unpredictable piece of film-making. It’s definitely one to watch if you’re after something aggressive, nasty and different. 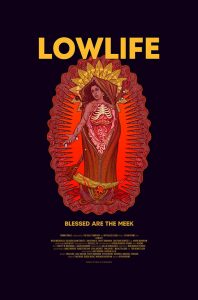 Lowlife comes from director Ryan Prows and marks his striking feature debut. If Lowlife is anything to go by, then he’s going to go on to do great, great things in the world of cinema.

Synopsis:
What happens when you throw together a fallen Mexican wrestler with serious rage issues, a just-out-of-prison ex-con with a regrettable face tattoo, and a recovering junkie motel owner in search of a kidney? That’s the premise of the berserk, blood-spattered, and wickedly entertaining feature debut from Ryan Prows. Set amidst the seedy underbelly of Los Angeles, Lowlife zigzags back and forth in time as it charts how fate—and a ruthless crime boss—connects three down-and-out reprobates mixed up in an organ harvesting scheme that goes from bad to worse to off-the-rails insane. Careening from savagely funny to just plain savage to unexpectedly heartfelt, this audacious thriller serves up nonstop adrenaline alongside hard-hitting commentary about the state of contemporary America.

Check out the trailer below and look out for Lowlife when it is released on VOD and Digital HD on 6th April 2018. The film stars Nicki Micheaux, Ricardo Adam Zarate and Jon Oswald.