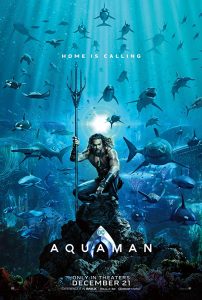 Full disclosure: I’d be letting all this Aquaman chatter slide like water off a duck’s butt if it wasn’t for the fact that the upcoming superhero flick from Universal and DC is directed by James Wan. If a 21st Century Master of Horror is at the helm, the man who pioneered the Saw, Insidious, and Conjuring franchises, well—you’ve got my attention. This has been the case since Wan’s affiliation with the project was first announced, and the filmmaker’s insistence that he’ll be incorporating horror troupes has maintained my smouldering curiosity.

The trailer for Aquaman was released upon rabid crowds at Comic-Con this weekend and, well, it’s pretty damn good. While it seems like standard superhero fare for the first 60 seconds or so, the second half is filled with intriguing sea beasts and the ominous villain Black Manta. And there’s a huge tidal wave sure to get anyone’s blood pumping—even black-hearted horror fans. Oh yeah, and Aquaman can fly?

Give the trailer and synopsis a look-see below.

Synopsis:
From Warner Bros. Pictures and director James Wan comes an action-packed adventure that spans the vast, visually breathtaking underwater world of the seven seas, “Aquaman,” starring Jason Momoa in the title role. The film reveals the origin story of half-human, half-Atlantean Arthur Curry and takes him on the journey of his lifetime—one that will not only force him to face who he really is, but to discover if he is worthy of who he was born to be…a king.