The executive vice president of Universal 1440 Entertainment has described the upcoming sequel to Tremors as:
“The craziest, most over-the-top movie in the Tremors saga to date. It takes the franchise’s signature combination of suspense, action and humour to new explosive heights.”

Luckily, for those of us that are itching to get our hands on Tremors 6, the film has now gone in to production in Cape Town with returning director Don Michael Paul (Tremors 5: Bloodlines) and actors Michael Gross, Jamie Kennedy, Tanya van Graan and Greg Kriek.

In the sixth addition to the monstrous horror-comedy, Burt Gummer and his son Travis have to fend off Graboids at a remote research station. 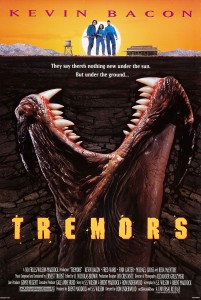 Burt Gummer and his son Travis Welker find themselves up to their ears in Graboids and Ass-Blasters when they head to Canada to investigate a series of deadly giant-worm attacks. Arriving at a remote research facility in the arctic tundra, Burt begins to suspect that Graboids are secretly being weaponized, but before he can prove his theory, he is side-lined by Graboid venom. With just 48 hours to live, the only hope is to create an antidote from fresh venom — but to do that, someone will have to figure out how to milk a Graboid!

From that synopsis, it certainly sounds like an even crazier addition to the franchise and with a concept so ridiculous; the crazier the better, we say!