A new clip has been put out for sci-fi horror Viral, the latest from Paranormal Activity 3 and 4 directing duo Henry Joost and Ariel Schulman.

It shows a high school party quickly breaking up with the arrival of an infected guest, while sisters Emma (Sofia Black-D’Elia) and Stacey (Warm Bodies’ Analeigh Tipton) watch fearfully as they hide from the attack.

Travis Tope (The Town That Dreaded Sundown) and Brianne Howey (Fox’s The Exorcist series) also star in the film, which is co-scripted by Christopher Landon, who wrote Paranormal Activity 2-4 as well as the fifth entry, The Marked Ones, which he also directed. 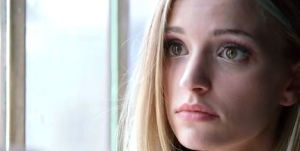 Teenage sisters Emma and Stacey live a normal life, until their small suburban neighbourhood is stricken with a mysterious parasitic virus. As the disease rapidly spreads throughout the town, the two band together to barricade themselves from infection. But it may already be too late – when the virus enters their home, the sisters are faced with an impossible choice: protect each other, or survive the virus.

Viral hits Digital HD on July 29th courtesy of Starz Digital. An On Demand release follows on August 2nd, along with a DVD from Anchor Bay, Radius-TWC and Dimension Films.