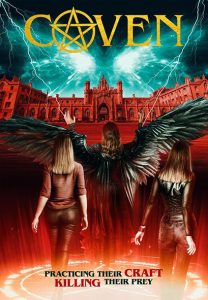 Synopsis:
As they prepare to perform a ritual to invoke the powers of the ancient witch Ashura, a coven of undergrad occultists seeks out a fifth member to replace the one their leader killed. In the process, they unwittingly unleash hell on their campus.

Let’s cut to the chase: Coven is a movie you’ve seen before. Specifically, you saw it in 1996 back when it was called The Craft. But despite telling a lower-budget version of a familiar story, only with the action transplanted from a high school to a college campus, the film does have some elements going for it that may make it worth a watch if you’re feeling witchy.

Coven was directed by Margaret Malandruccolo, making her feature debut, and written by Lizzie Gordon, who also stars. The film is well shot and beautifully lit, giving it a glossier feel that you’d expect from a production of this size. Barring a particularly terrible green screen during the climax, the sets and locations are consistently engaging to look at, brimming with all the bohemian décor and occult memorabilia you could hope for, without feeling cheap.

Unfortunately, the screenplay struggles under the weight of the film’s sparse 80-minute runtime, which starts to feel drawn out within minutes as we get the first of many slow-mo walking shots. The second act crawls as the coven tries to recruit its final member, and while the cast does a good job with the material they’re given, they’re (ironically) powerless to wring much interest out of Ashura’s anticlimactic ascension. There was room to flesh out these characters, but we learn very little about many of them beyond their love of lingerie. 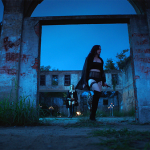 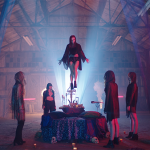 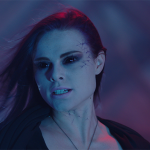 Speaking of lingerie, the film walks an incredibly delicate line between empowerment and exploitation throughout. If you didn’t know going in that Coven was directed by a woman, you’d likely question whether all the lingering shots of the actor’s half-naked bodies were strictly necessarily (or, indeed, whether witchcraft only works in this universe if you’re not fully dressed). There’s also a sensual love scene between two witches in a same-sex relationship, but an encounter with a homophobic bar patron elevates their relationship beyond something designed solely for the male gaze. It’s satisfying to see them wreak their revenge against the slimeball, but it’s a shame that their dynamic isn’t more thoroughly explored.

In terms of special effects, Coven is a mixed bag. Malandruccolo understands the importance of hooking her audience from the get-go, and the witches’ early attempt at the ritual before the credits roll offers a fiery pentagram and enough pyrotechnics to accomplish that goal. But it quickly becomes apparent that the film has peaked early, with little more than CGI lightning left up its sleeve. As a result, Ashura’s rampage feels lacklustre, and she’s defeated with a whimper rather than a bang.

Stylish but never actually scary, Coven’s failure to gain momentum prevents it from casting a spell over its audience. However, Malandruccolo’s assured direction helps to mask a multitude of sins, and with better scripts and bigger budgets, she may conjure up magic yet.

Coven is now available on DVD and VOD in the U.S.