Cosy up With The Dead in Gehenna: Where Death Lives

Riding high following the mighty success of The Shape of Water, horror regular Doug Jones stars in Gehenna: Where Death Lives, which hits cinemas and On Demand next month. Ahead of the release comes this pretty freaky trailer.

The debut directorial feature from celebrated visual effects artist Hiroshi Katagiri (Pacific Rim, The Hunger Games, Escape From L.A.), the film stars not one but three genre veterans, with Jones starring alongside the great Lance Henriksen (Aliens, Near Dark) and Patrick Gorman, who appeared in 1976 slasher Alice Sweet Alice, as well as a handful of other cult horror flicks. 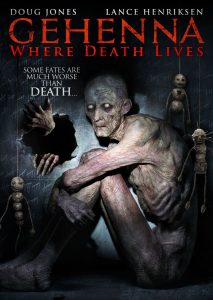 Here’s the press release write-up:
“Encompassing horror, suspense and a twist that will blow your mind, Gehenna fixes on five people who enter a hidden bunker from WW2, and realize it’s way more than a bunker. Some fates are MUCH worse than death.”

Gehenna also stars Eva Swan, Simon Phillips and Justin Gordon. It lands in US cinemas and on digital on May 4th, from Uncork’d Entertainment.