Horror Game Moons of Madness Will Arrive this Halloween 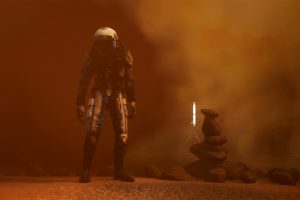 Rock Pocket Games’ upcoming cosmic horror title Moons of Madness has been generating buzz in gamer circles for a while now. And the wait is nearly over! The game’s publisher, Funcom, has just announced that the Lovecraftian-inspired title will arrive in time for Halloween.

In the game you play Shane Newehart, a technician working at a secret research base on Mars. Newehart doesn’t have the security clearance to understand what’s truly going on as things start to go wrong at the base… He only knows the hallucinations are getting worse.

Rock Pocket Games has called Moons of Madness a true passion project and says the team has been able to achieve all the things it set out to do with the game thanks to the support of the publisher. The game shares a thematic universe with another Funcom title, Secret World Legends, though they serve as standalone stories.

Moons of Madness will be available for PC, Xbox One, and PlayStation 4 later this year. Check out the new trailer for the game below.