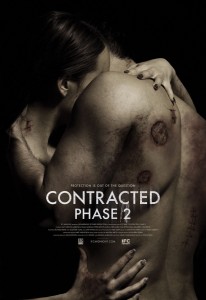 Synopsis:
After contracting a virus from an intimate encounter, Riley is thrust into a desperate search for a cure before it consumes him and the entire world.

Contracted: Phase II is the sequel to the 2013 indie body horror Contracted. Expanding the world created by Eric England, Phase II is penned by Craig Walendziak and tells the story of Riley (Matt Mercer) who has contracted a necromantic virus after an intimate encounter. As the necromantic virus spreads across Los Angeles the police work to their best ability to quarantine the city before it takes over the world. Meanwhile, in a desperate attempt to find a cure before it is too late, Riley attempts to track down the person who is responsible for the outbreak.

Immediately picking up where Phase I left off, Phase II is completely different in tone. Instead of a slow-burning, intimate body horror Forbes has constructed an action-packed and gruesomely gross film which moves along at a much swifter pace. At first I wasn’t too sure about the sequel as it feels so starkly different from the first installment but after having put my feelings for the first one aside, I begun to appreciate the combined efforts of Craig Walendziak and Forbes for the sequel.

The effects are incredibly gross and there were more than a few moments that made me gag. One scene in particular at a party reminded me of the dinner scene in Peter Jackson’s Brain Dead which was utterly disgusting. As with any sequel, it is clear that the budget for the effects here is considerably more than it was for the first installment and as such the audience is treated to a wide range of vomit-inducing effects that will even test those with the strongest of stomachs.

Make no mistake, this film is unnerving and offensive but is such in a good way. The gore effects and subversive humour bring an additional level of entertainment that the first was missing. Willing to go one step further to develop the world around the story, Phase II works well as a sequel and as a separate film entirely. Sure, the film lacks the emotional impact of the original but it goes in a different direction to provide answers about the development of the necromantic virus.

Matt Mercer returns to reprise his role from the first film, stepping up to lead the film. He does a great job and carries the responsibility reasonably well. As an actor he never overacts and he helps sell the credibility of the film by grounding what could have otherwise turned into some particularly overcooked moments. As for the rest of the cast Peter Cilella provides adequate support as does Morgan Peter Brown who takes over Simon Barrett’s role from the original. As the villain of the movie, Brown’s interpretation of what was a silent and mysterious character in the first has become almost a pantomime villain but with clear sociopathic tendencies. Not only does this give the film a strange edge but this performance works incredibly well with Mercer’s more straight-laced and serious delivery.

Don’t get me wrong, Contracted Phase II is far from perfect, but it doesn’t stop it from being a fun film. So with the door clearly left open for a third installment I would be interested to see where things branch from here, especially if Peter Cilella steps up to lead it.