Synopsis:
In the snowy Utah Mountains, an ancient being terrorizes four friends as they try to survive. 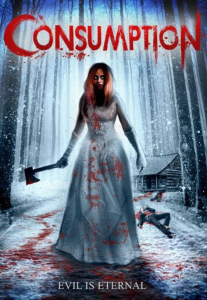 Four friends take a retreat in the ever so snowy but quite beautiful mountains. All is not as it seems, as even from the off set, everything is a little bit weird and out of place. There is no real hi jinx or enthusiasm for a weekend break, as one might expect but also, as our young friends make their journey by car, factions could be seen and felt amongst the group.

Seth (David Lautman) who already looks half dead, tells a ghost story which does set the tone nicely that paves the way for misfortune and misadventure. When they arrive they meet the odd couple from hell and they interrogate the two girls Becca (Sarah Greyson) and Mallory (Arielle Brachfield) over their belief in god.

With snowy isolation, Seth being strangely overly protective over his suitcase and Eric (Chris Dorman) continuing with his drinking, the vacation is not going to be a good one and neither was the film.

Released by Wildeye and under a new title ‘Consumption’ (formerly known as Live-In-Fear) this first time feature from Brandon Scullion, doesn’t offer much in the way of fear or scares. In the first half of the film, the storyline was quite confusing and I had no real understanding of where it was going or indeed what was going on.

We then had some odd intermission moment, which did brake up the film but it lasted way too long. It was like this swirl of psychedelic colours that added no real purpose to the film. Truth be told, I thought it was the end of the film, which did offer some relief because my head was mushed. Fortunately, I skipped passed and realised it was just some mad Scooby doo moment.

The issue that I have with Consumption, is not that it is low budget or indeed that the actors looked bored, it was the music and the practical effects. It stands for reason that if someone has a hand chopped off, it makes sense that it is noticeably shorter in length than the other. The other thing that grated was some of the musical accompaniments, which included plucking of a guitar one string at a time.

I did like the storyline to a point but I feel that the execution was all wrong and that the actors were not feeling it as quite as they should be. There was even an appearance from film veteran Maria Olsen and like the others, she was there in character but there was no substance to her role.

Consumption is due to be released by Wildeye on July 26th.