The Conjuring 2 Writer Reimagining Invasion of the Body Snatchers

With new remakes of both The Fly and The Blob in development, it seems like we’ll be seeing more remakes of already-remade horror properties. The latest to arrive on the radar is less of a re-remake however, and more of a re-re-re-remake. Deadline is reporting that screenwriter David Leslie Johnson (The Conjuring 2, Orphan) has been tasked with scripting a new film based on Jack Finney’s 1954 novel The Body Snatchers, for Warner Bros.

The classic sci-fi story first graced the screen as Invasion of the Body Snatchers in 1956, which was remade in truly masterful style by director Philip Kaufman in 1978. Abel Ferrara even took a crack with 1993’s Body Snatchers, with the most recent take on the story emerging as The Invasion in 2007. Despite starring Nicole Kidman and Daniel Craig, I’m pretty certain the latter was seen by absolutely no one. 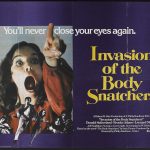 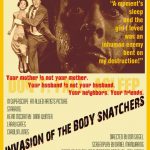 The story concerns a small American town which is invaded by aliens. The visitors plant pods which grow and birth physical copies of the town’s residents, who one-by-one fall prey to their extraterrestrial replicas. As the human copies begin to spread throughout the town, a local doctor figures out what is happening and decides to fight back, unaware of who is human and who is not.