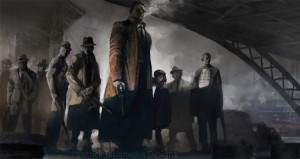 Patrick Tatopoulos is known for his work on the special effects of films that include Underworld, Silent Hill, The Ruins and Trick ‘r Treat. In 2009 he dabbled in the directing world with the successful entry in the Underworld franchise with Rise of the Lycans. Most recently, he has designed Batman’s most popular gadget the Batmobile for the upcoming Batman v Superman.

Now, we have a sneaky peak at Tatopoulos’ next directorial endeavour Obituary Boys with a couple of pieces of concept art. The plot and characters are being kept schtum for the time being, but we do know that the film is about monstrous-looking mobsters and someone called Frank. Casting is set to begin soon, so we’ll keep you updated on the news surrounding Obituary Boys as it is made official.