THE COMPANY OF WOLVES: Film Review

I’ve always maintained that horror films and fairy tales have more in common than people think. Both function on an almost exclusively metaphorical level; they attempt to tap into the inherent fears and desires of an intended audience; and they are often morality tales that are conservative in nature, critical of sex before marriage and other typically non-Christian behaviour. Perhaps the best example of this can be seen in Neil Jordan’s The Company of Wolves, based on an amalgam of stories from Angela Carter’s The Bloody Chamber. In the book, Carter reworked European fairy tales to expose their sexual, violent content, content which had been removed as the tales became increasingly infantilised. If you still need convincing of the link between horror films and fairy tales, The Company of Wolves is the perfect place to start. 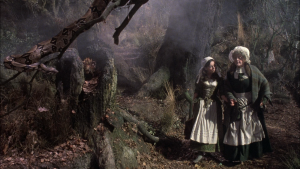 But for those unhappy to see the tales as something far darker and more sexual than those they heard as a child, it might be best to sit this one out. But these stories, before they lost popularity in the nineteenth century, were never intended for children in the first place. Psychoanalyst Bruno Bettelheim once stated that changing these stories to suit children actually limited their usefulness, and The Company of Wolves (as well as Carter’s fiction) is an effective remedy to this statement.

The film is loosely based around the story of Little Red Riding Hood, and takes place almost entirely in the protagonist’s head as she sleeps. Rosaleen, the archetypal peasant girl, lives with her family in the woods, making frequent visits to her grandmother (played by Angela Lansbury). After her sister is killed, Rosaleen’s grandmother tells her a series of folktales, all focusing on humans who have the power to become wolves. The film culminates in Rosaleen acting as Little Red Riding Hood, as she meets an ominously handsome man on the way to Granny’s house.

But this is not the cheery, saccharine version of the story we heard as children. The film is rich and heady, layered with Freudian imagery, and concerned with far more complexity than the simple good vs evil trope we might remember. In one scene, Rosaleen climbs a tree to find a bird’s nest containing four eggs, a hand mirror and a pot of rouge. She applies the rouge to her lips, and as she considers her reflection in the mirror, the eggs hatch to reveal tiny human foetuses inside. In another, a wolf’s head is severed and falls into a vat of milk. In beautiful slow motion, the head disappears and resurfaces, dreamily and bloodily, and then mutates into the head of a man.

The imagery here is all used to explore the werewolf as a sexual metaphor, exploring the difficult transitional stage of puberty and menstruation. There are repeated shots of the full moon, of blooming roses and Rosaleen’s red cape, all emphasising the themes that Carter laid bare in her short fiction.

Although the film follows a conventional fairy tale narrative structure (with a child separated from their parent, traversing a dark landscape of temptation and desire before reaching maturation), the end of the film makes it clear that this is not a story meant to pacify. Instead of fearing the wolf, Rosaleen becomes one herself, declaring that she prefers to be in the company of wolves. Although some of this is undermined in the final sequence (a scene which Carter herself was unhappy with), the message here is clear: that the only way to survive is to find a way to save yourself.

There has never been a shortage of fantastic special effects attached to werewolf films, but the effects here are nothing short of extraordinary. The scene in which a man rips the skin from his face down to the musculature, pulling it away in strips before becoming a wolf, is still strikingly effective today. Similarly, the famous sequence where a wolf’s snout emerges from the Huntsman’s mouth is both powerful and frightening, quite unlike any other werewolf transformation seen on screen.

Though the film is technically all a dream and contains elements of dream-logic, the set design – inspired by classic fairy tale illustrations – is arguably the most visually evocative part of the film. Limited by a small budget, Jordan nevertheless captured a strange, artificial-looking forest, perfectly adding to the oneiric atmosphere of the film. The trees, dense and foreboding, create a claustrophobic backdrop to the story, and the thick snow in the final scenes adds to the idea of Rosaleen’s threatened innocence. 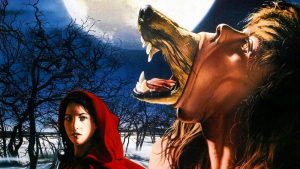 The Company of Wolves is surely one of the best werewolf films ever made, and certainly the most artful and complex. Filled with strange, surreal imagery and some fantastic visual effects, the film still has the power to shock and confound the audience. At one point, Rosaleen’s grandmother warns her to “never stray from the path,” but the pairing of Jordan and Carter prove that, sometimes, forging your own path is the best way to go.