The author of cult limited comic series I Kill Giants has confirmed via Twitter that the film adaptation has now begun principal photography.

Joe Kelly, who also scripted the film, wrote on Tuesday: “In other news, #IKillGiants has begun principal shooting today. So excited, so proud and so lucky I met @ken_niimura!”

The Conjuring 2’s Madison Wolfe heads the film as Barbara, a young teen who hides from the real world, spending her time playing Dungeons & Dragons and the like. The fantasy worlds conjured by such games begin to get a whole lot more real however, when their monsters break through into real life. 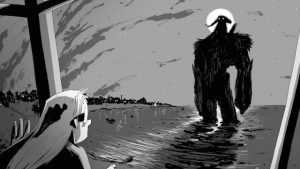 I Kill Giants marks the feature debut of director Anders Walter, who has made a number of short dramas in his native Denmark. It is produced by its own giant, in the form of Hollywood big-hitter Chris Columbus, known for directing Home Alone and a couple of Harry Potters, as well as writing ‘80s classics Gremlins and The Goonies.