Synopsis:
Times are tough for Mr Trumbull and his funeral parlour. They just aren’t getting the work they used to, and in an effort to pinch pennies they have even resorted to recycling coffins. Trumbull’s drinking doesn’t help, and marrying the poor dear Amaryllis to get his hands on her father Amos’ funeral parlour in the first place has turned out more trouble than its worth. Trumbull takes out his frustrations on the family, when he isn’t spewing venom at his lovely supportive wife, he is trying to slip poison into her father’s tea. To add to their problems the rent is overdue, by a year, and Mr. Black the landlord wants paying or they are to get out. Trumbull has the answer though, with his trusty sidekick Felix Gille, the two sneak into homes of unsuspecting victims at night with the hope they can create more business, by force if necessary!

It’s time to get your party vibe on because one of the most delightful horror/comedy cross-over moments to come out of both the A.I.P association with star and icon Vincent Price, and the US sixties gothic cycle, hits BD this week- courtesy of Arrow Films; a label who are fast establishing themselves as the go-to UK home video unit for all things Vincent on Blu-ray. The film sees the reuniting of stars Vincent Price, Peter Lorre and Boris Karloff; a team who also ran riot together in Corman’s Poe inspired, tongue in cheek rendition of The Raven (1963) (which was released that very same year). The Comedy of Terrors, a clever play on the Shakespeare title- replacing ‘errors’ with ‘terrors’- staying true to the intentions of comical chaos laid out by the original Bard,  sees a simple situation spiral out of control in farcical style. This is not only a film that finds hilarity in the macabre- and let’s face it this is something Shakespeare would have likely highly approved of- it also acts as something of a celebration piece; the perfect homage to the legacy of its stars. To see them all assembled here, clearly having such a ball doing what they do, is something that can only bring joy to those who understand the importance of these titans, and the contribution they made to the genre in both their spirit and commitment.

The Comedy of Terrors is something of a pastiche to classic horror. Filmed on the reused set of Corman’s Lovecraftian infused The Haunted Palace, no expense is spared when it comes to pumping out the fog machine, and layering on graveyard atmosphere. The costuming is exquisite, a kind of sombre Victoriana, with Price, especially, looking the part when decked out- as he is for most of the duration- in formal mortician style (complete with the most impressive of hats). The film channels into that Victorian love of hilarity in morbid concepts, and nothing is off limits when it comes to layering on the corny puns for Matheson’s gallows humour infused script. For instance when looking at a new design of coffin Lorre is making, Price kicks it away declaring “no one would be seen dead in that!”; these are lines that make you simultaneously groan and shriek in childish glee, harking back to an age when even horror was still fairly innocent in its motivations.

This was one of director Jacques Tourneur’s last pictures in his solid career. A filmmaker who was no stranger to the horror genre, Tourneur exploits all angles to great effect. Not only in encompassing the right look and feel for the piece, but in the copious use of physical comedy to compliment Matheson’s strong script. Tourneur had previously turned out genre gems such as Night of the Demon (1957), Cat People (1942) and I Walked with a Zombie (1943). The Comedy of Terrors was his parting shot for horror, and one that represents something of a swansong for the filmmaker. But then you have to ask what could go wrong when you have the able hand of scribe Richard Matheson on board. The writer was known for his talent in producing strong scripts, while his association with star Price was already well established. Matheson wrote the original novel I Am Legend, which was later adapted for The Last Man on Earth; a role that pitched actor Price in a very different light to his usual infusion of sinister/camp. The writer is also the hand responsible for many of the Corman Poe inspired scripts- the series that helped to cement Price as a genre star the world over.

It almost goes without saying the performance levels involved here are top class. Price in the lead as the nasty abusive mortician Waldo Trumbull, gives the actor a chance to go all out and have fun in his part. The venomous vitriol he spews to those around him is nothing short of hilarious, while Price gets to ham things up on overdrive playing out scenes as a drunken lush, who has some interesting ideas about getting in new business. Thoroughly despicable in every sense of the word, the spirit of high camp involved here still makes Price highly loveable in his role- as it should be; a facet it seems that very few others would be able to pull off and get away with. Karloff takes a less physical role, but nevertheless one that is both charming and genuinely funny as the old man Amos Hinchley. Wittering away in the background, deaf as a post, and completely senile, Karloff is on top form. It is sad that health prevented him from taking a more active role, but still his inclusion is not without value. Peter Lorre, as Felix Gille is thoroughly entertaining throughout. Taking up the slack as general butt of a lot of jokes, the star makes a worthy companion to Price’s nefarious lead. There is such an energy evident between the two it proves nothing short of mesmerising; especially when you consider the mismatch in physical size and the general sense that these were two actors who just clicked together when they shared time onscreen. Lorre is a lighter character in contrast to Price, portrayed as somewhat misguided but generally good hearted too- his fate forced by circumstance. Representing some femininity in the cast- not that there is a lot on offer- is the wonderful Joyce Jameson as the poor lamentable wife of the mortician, Amaryllis Trumbull. Jameson provides both on-screen glamour and some brilliant comedy value- not least in her ‘opera’ renditions and awful organ playing. A sentimental and likeable character, that is not without some sense of pathos, she takes the brunt of Trumbull’s nasty tongue lashing ; the lighter notes of Jameson’s character playing in perfect harmony to Price’s dark tones. While last but very definitely not least Basil Rathbone puts in a fantastic performance as the irritated landlord Mr. Black- the man who refuses to die quietly. Resurrecting several times during the duration, hilarity abounds with Rathbone’s rousing performance that includes some belting rounds of Shakespearian soliloquy too!

This Arrow edition thoroughly does the film justice. Presented in its original widescreen Cinemascope format, in a restored print, The Comedy of Terrors shines in all its proper glory. The colours look especially rich and deep- although never over saturated- providing the look and feel of a gorgeously rendered live oil painting at times. The texture and detail come nicely defined with little in the way of flaw or damage to the print. While the extras provide valuable additions, the highlight of which is the David Del Valle  and David DeCoteau audio commentary, being both immensely informative and entertaining to boot.

Full specs are as listed:

* High Definition Blu-ray (1080p) and Standard Definition DVD presentation of the feature, transferred from original film elements by MGM
* Original Mono 2.0 audio (uncompressed PCM on the Blu-ray)
* Optional English subtitles for the deaf and hard of hearing
* Audio Commentary with author and film historian David Del Valle and cult director David DeCoteau
* Vincent Price: My Life and Crimes – The previously unreleased, alternate cut of the 1987 David Del Valle/Vincent Price interview in which the actor looks back over his extraordinary career
* Whispering in Distant Chambers: The Nightfall of Jacques Tourneur – A specially-commissioned video essay by David Cairns looking at the various themes and stylistic motifs which reappear throughout the director’s work
* Richard Matheson Storyteller – An archive interview with the Comedy of Terrors writer
* Original Theatrical Trailer
* Reversible sleeve featuring original and newly commissioned artwork by Paul Shipper
* Illustrated collector’s booklet featuring new writing on the film by Chris Fujiwara, author of Jacques Tourneur: The Cinema of Nightfall

Another great release into the already strong back catalogue of Vincent Price releases for Arrow Video. Top class viewing for all lovers of classic horror. 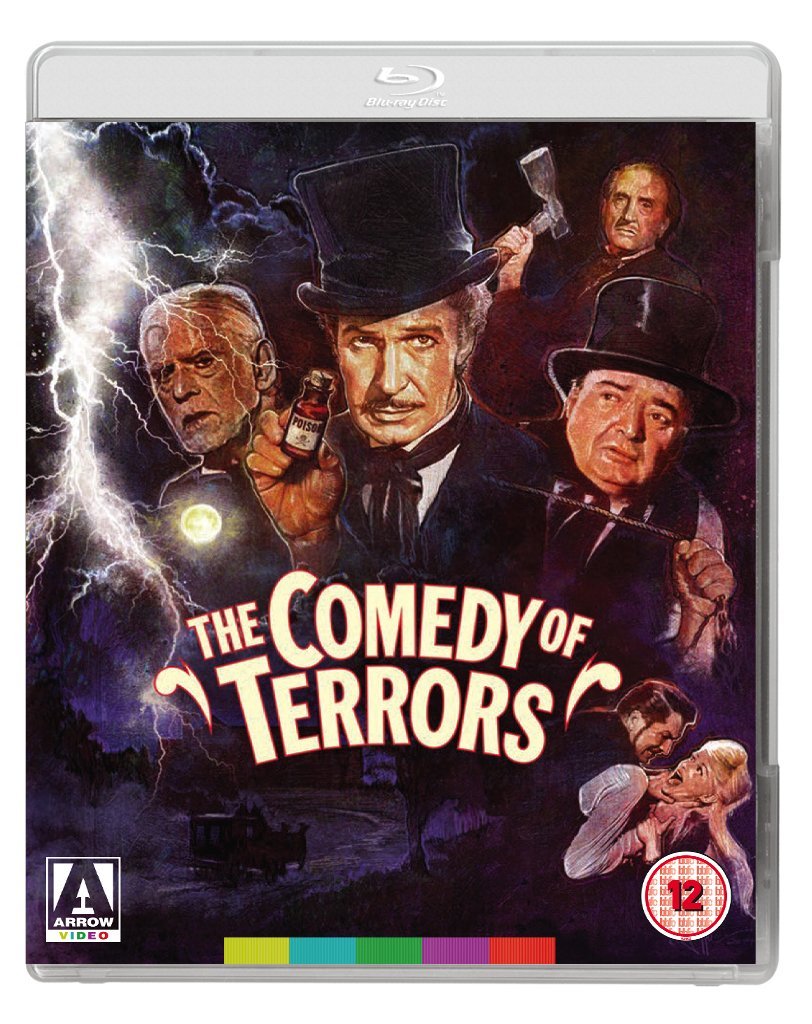