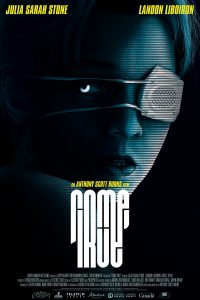 The first chilling teaser trailer has been released for sci-fi horror film Come True, which will world premiere on August 30th as part of this year’s virtual edition of the Fantasia International Film Festival.

Directed by Anthony Scott Burns (Our House, Holidays), Come True follows high school student Sarah who, at her lowest point and struggling with recurring nightmares, runs away from home and finds herself with no one to rely on. Chancing upon a university sleep study that offers the promise of safety and money, she discovers an unexpected friend and confidant in the form of Jeremy, the study’s overseeing scientist.

But there’s something curious about the proceedings, and being under observation seems to make Sarah’s disturbing dreams even worse. As the darkness begins to close in, it’s soon clear that Sarah has unknowingly become the conduit to a horrifying new discovery…

Julia Sarah Stone (The Killing) and Landon Liboiron (Truth or Dare) star in the film, which was executive produced by Vincenzo Natali (Cube, In the Tall Grass). Electric Youth (Drive) and Pilotpriest created the music.

Check out the creepy teaser below!