ALL THE COLOURS OF THE DARK: Film Review 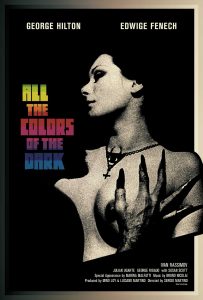 All the Colours of the Dark – released in 1972 – is a suitably psychedelic giallo film, complete with illusory, soft-focus camerawork; nightmarish dream sequences and a soundtrack inspired by ancient Tibetan mysticism. Best known for starring the beautiful Edwige Fenech, the film blends together a variety of psychoanalytic approaches and theoretical insights, posing questions around the nature of dreams and reality. Though undeniably beautiful to look at, the film becomes less successful as it goes on, mainly due to its excessive style.

After a recent miscarriage, Jane (Edwige Fenech) begins to lose her grip on reality, experiencing vivid nightmares involving a blue-eyed, knife-wielding killer. Her boyfriend Richard (George Hilton) prescribes her vitamins, while her sister Barbara (Nieves Navarro) takes her to see a psychiatrist, insisting  that Jane’s psychosis has been caused by the repressed memory of their mother’s murder. As Jane becomes less and less able to distinguish between dreams and reality, her next door neighbour Mary (Marina Malfetti) offers to take her to a Black Mass, claiming that a coven of witches is the only thing able to cure her. Reluctantly, Jane is initiated into the coven, but when the man from her dreams begins to stalk her in real life, she realises that leaving the coven will not be as easy as she first assumed.

Like other films within the genre, when taken on a purely narrative level, All the Colours of the Dark is, quite frankly, utterly ridiculous. The idea that well-to-do Jane, living in a posh London suburb, would think a coven of witches could cure her psychosis requires a massive suspension of belief, and the film’s finale – in which the killer’s motives are finally revealed – is too ridiculous to be taken seriously. Instead, Sergio Martino insists that we view the film on a purely metaphorical level, using hallucinatory images to create a heightened sense of unreality. As such, the film’s abstract, dreamy imagery puts us squarely in the mind of Jane, as we witness her attempts to contain her own transgressive drives and desires.

When viewed in this way, All the Colours of the Dark is a film about the lasting effects of trauma, using psychoanalytic approaches to explore Jane’s psychotic episodes. The dream sequence at the beginning of the film – involving pregnant women, knives and the ubiquitous blue-eyed killer – is a stylish summation of Jane’s past, even though it makes no sense until later on. Similarly, Jane’s stalker is an effective metaphor for the way the past comes back to haunt us – particularly when the killer’s significance is revealed at the end of the film.

But these themes and ideas do not make up for how wildly uneven the film is in terms of tone, style and pacing, or how disappointing the final twists turn out to be. Although the first half an hour is littered with clues and red herrings, the film soon devolves into something far more rote and predictable, with the characters’ motives  often seeming like an afterthought. The final scene, in which the truth is finally revealed to Jane, makes hardly any sense at all, undoing some of the more successful aspects of the film as a whole. 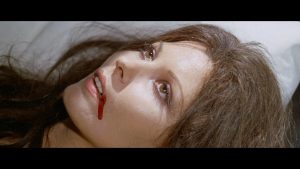 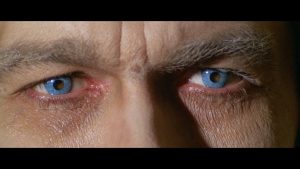 All the Colours of the Dark – released on Blu-ray by Shameless Films this month – is a movie that’s far easier to admire than it is to love. Sergio Martino’s camerawork is consistently effective; Bruno Nicolai’s soundtrack is possibly one of the best horror scores of all time; but the lack of coherent plot and believable characters make the film a good example of style over substance. Fans of giallo films will certainly want this in their collection, but for more casual horror fans, you might be better off left in the dark.