A bright and colourful – but still delightfully unnerving – poster has been unveiled for the Peter Dinklage-starring I Think We’re Alone Now. Anyone else now have the song stuck in their head? 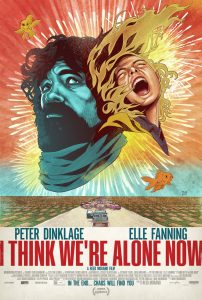 Synopsis:
The apocalypse proves a blessing in disguise for one lucky recluse — until a second survivor arrives with the threat of companionship.

I Think We’re Alone Now comes from director Reed Morano, the director behind episodes of The Handmaid’s Tale, and writer Mike Makowsky, who also wrote the crime-comedy Take Me with Taylor Schilling.

I Think We’re Alone Now additionally stars Elle Fanning, Charlotte Gainsbourg and Paul Giamatti. Look out for the film when it is released in the USA on 14th September 2018. For now, enjoy the dazzling poster.