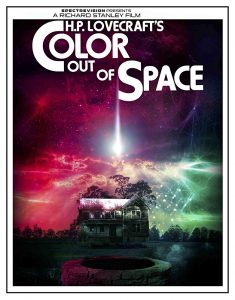 It’s always a thrill to see Nicolas Cage (Mandy) in a horror film because, whether it’s good or bad, you can almost guarantee it will be wacky. True to form, the trailer for the Cage-starring Color Out of Space is chock-full of cosmic horror chaos.

Based on the H. P. Lovecraft short story of the same name, Color Out of Space revolves around a meteorite that lands in the Gardner family’s front yard—unleashing an extraterrestrial organism that infects their bodies and minds.

The film will be released on January 24, 2020 by RLJE Films. Let a little colour into your life by watching the trailer below.