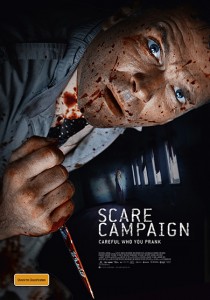 It’s April Fool’s Day so what better a moment than now to celebrate the news that Scare Campaign, the latest offering from Australian writers/directors Colin & Cameron Cairnes, has been picked up for distribution in a plethora of countries?

Whilst the film has secured a July home release through Madman Entertainment in Australia, international deals have been confirmed for Latin America, the Middle East, Turkey, Greece, Indonesia, and here in the UK (the latter through Metrodome).

If that wasn’t enough, the Cairnes have also confirmed that Scare Campaign will be screening as one of the fourteen films chosen for the official selection at this year’s FANT Bilbao Fantasy Film Festival taking place this May. Cameron will in attendance at the festival and sounds pretty stoked to be flying over: “Spain is home to a large and very passionate horror film scene, and I can’t wait to experience that first hand. Added to which, I hear the Basque Country tapas are to die for.”

To celebrate the news that the world will get to see the flick some time very soon, SCREAM caught up with the Cairnes siblings to talk about the film, the influence Japanese horror films and pranks had on the project and the eerie asylum they scouted out which helped give the film that much extra oomph…

SCREAM: So I hear the idea for SCARE CAMPAIGN came about just from you trolling on the internet and stumbling on a few pranks that you thought could be fleshed out into a full-fledged film premise?

Colin: Yeah, obviously prank videos and hidden camera pranks and that sort of thing have been around since the dawn of television really but it just felt like an easy one that would make for an entertaining and fun premise. I think we just stumbled upon some of the classic horror-themed prank videos that came out of Japan and South America and things like that; stuff that you probably wouldn’t get away with in Australia or the UK for way too many legal issues. And that was what inspired us. What if one of these pranks went horribly wrong and they victimise the wrong guy and the production crew itself ended up becoming the victims?

SCREAM: What did you find more difficult to come up with? The pranks themselves, or fleshing out a story based around pranks, particularly considering how many twists and turns you pump into the premise?

Colin: Any film that has a number of twists and turns like this, yeah, there are some that you might see coming, and hopefully others that you don’t. I think you can’t fool all of the people all of the time, but even if you do sense that something is coming I think there’s a sense of satisfaction in having it play out kind of as you imagined. But I think there’s always something different; there’s always a twist on the twist as it were. I think there’s so much going on and I think the clues are there but there’s misdirection as well which ties in with the theme of the characters in the show themselves. Look, it’s one that you’ve got to get right in the scripting process and then, in the actual execution, it’s a matter of just making sure everyone buys into what they’re doing at any given time, just making sure the actors, and then consequently the audience, is in the moment. That’s what’s going on and people are kept guessing.

SCREAM: And what about the actual pranks? Where they based on jokes you’d seen on the net or did you devise them all from scratch?

Colin: That’s a good question. But I think we kind of just dreamt them up.

Cameron: A lot of it had to do with the location as well; just sort of dictating what we could do. We had to just think what was the best sort of scenario for that sort of environment. But the opening prank was influenced by a bunch of different things.

Colin: There’s probably a bit of J-horror going on there and, like we said, some of those Japanese pranks which can be pretty extreme, but oddly quite funny as well. But yeah, it’s like what Cam says, once you find the location you start scripting stuff. Especially when you are on a budget, you can’t just let your imagination run riot and then realise we can’t build that set.

SCREAM: It must have been an immense task for your editor, Adam White?

Cameron: Yeah, it really was, and we helped out with the edit so we were right in the thick of it too. But Adam is amazing. He had amazing organisational skills to get all that stuff in an order that you can actually work with in an efficient manner. He was indispensable.

Colin: He cut the assembly edit while we were shooting and then the three of us starting working on the next cut together. Early on in the process Adam also jumped across to the VFX department, which was a department of one person ….. him. I think we tallied up something like 300 VFX shots. Obviously, there’s not a lot of CGI stuff but all the monitors that needed to be comp’d meant a huge, laborious task for Adam. And he was always totally uncomplaining and always keen to do more …… so we kept giving him more.

SCREAM: Can you walk us through the practical effects side of things as there is some serious blood-letting going on once the prank is no longer a joking matter?

Cameron: Sure. We had Justin Dix and his crew working with us again. He runs a studio called Wicked of Oz here in Melbourne and he’s just a supremely talented guy who can do it all. In fact, he was our Production Designer as well so he was wearing a whole bunch of different hats on set. He’s a force of nature. He talks at a million miles a minute and he’s very hard to keep up with but he keeps producing this amazing stuff. He did the big set piece in Acres with the body going through the grinder and that was kind of the first time he’d ever done a gag like that so he’s always up for new and innovative stuff.

Colin: And he likes making his life more difficult than it needs to be. Like, we’ll write something that we think is reasonably ambitious and gory and he’ll want to top it and say, “Why can’t we go that little bit further and add something else?”

Cameron: If we write about a garroting, which we assume to be someone getting strangled around the neck, he turns that into the top of somebody’s head getting lopped off.

SCREAM: Obviously you’re promoting this one at the moment, but can you tell us anything about what you have on the cards a bit further down the line? Are you still making headway with the script for Late Night With the Devil?

Cameron: Yeah, we’re writing it as we speak. Well, not actually as we speak, but we’re maybe halfway through the latest draft and I think after that we’ll probably be happy enough with it so, all things being equal, maybe that will get up later in the year.

Colin: Fingers crossed. It’s set on the set of a late night talk show and strange things happen live on air which may or may not involve demonic infiltration.

Like we said, Scare Campaign will be hitting FANT Bilbao in May ahead of the July home release in Australia. As soon as official international release dates roll out we’ll let you know when and where you can catch it but, in the meanwhile, we’ll leave you to enjoy the trailer: