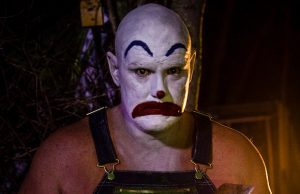 In the run-up to the appearance of the ultimate evil clown in next year’s It adaptation, the red-nosed pranksters have been causing bloody mayhem all over the place. Following on from Rob Zombie’s 31 and the Eli Roth-produced Clown is Tom Nagel’s Clowntown, which has found North American distribution courtesy of ITN Distribution.

The horror-thriller is reportedly inspired by a bizarre news story from 2014 about a bunch of people dressed as clowns who peacefully wandered the streets of the town of Wasco, California at night for reasons unknown.

Clowntown tells the story of a group of friends who get stranded in a seemingly abandoned town and find themselves stalked by a gang of violent psychopaths dressed as clowns. It is loosely inspired by the clowns who terrorized Bakersfield, CA in 2014. 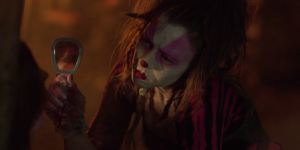 Clowntown will hit selected US cinemas on September 30th before landing on VOD and home video formats on October 4th. It is out now on UK DVD.