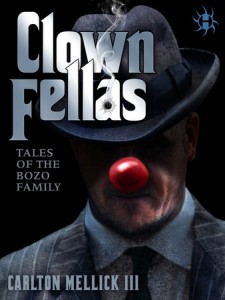 Carlton Mellick III is one of the leading authors of bizarro fiction and in his own words ‘pumps out some of the weirdest, trashiest, most imaginative books’ you’ll ever admit to being a guilty pleasure. A prolific author with over 40 books in print, freakily surreal titles such as The Haunted Vagina, Clusterfuck, Adolf in Wonderland, Baby Jesus Butt Plug and Razor Wire Pubic Hair comprises some of his back catalogue. Well worth checking his website out to see how tapped this guy actually is and you simply can’t help being drawn in by some of the books on offer, he’s also got a set of the most wicked sideburns I’ve ever seen.

Clownfellas is one of his latest offerings and it’s for the most part set in Little Bigtop, New York’s infamous clown neighbourhood. Clowns are real, they’re not entirely human and they’ve got some of the best weaponry you could imagine.

Little Bigtop is run by the Bozo crime family, clown mafia if you like and we follow various members of the Bozo clan in offshoot stories that all kind of collide in a big family wedding. Stories include capo Vinnie Blue Nose and his brush with the ever warring French clowns, Le Mystère, as he tries to protect the temperamental boss’s son Jimmy Bozo.

Pinky Smiles, the smiling clown, no creepy maniac clown smile neither, he actually possessed a pleasant smile and he’s about to propose to his girl, daughter of Don Bozo’s brother. Not everything goes to plan for Pinky though, he’s been set-up and there’s a deadly assassin heading his way.

And finally before the calamitous wedding we have the brilliantly unkillable Bingo Ballbreaker who wakes up in a pool of blood with a bullet hole in the back of his head. Girlfriends gone and so is his must precious possession, his Ilario Sperrazza violin.

“I once saw a guy OD on this stuff,” Winky said, giggling at the thought. “He laughed so hard his head exploded”.

How do you become a clown, well you’re either born that way, a pure clown or an injection of happy juice. If you risk the injection, there’s a 10% chance you’ll go loopy beyond repair, minds and bodies would become malformed and distorted. A Sideshow Freak.

The author writes in a simplistic, easy to read style that drags you along, it’s all tongue in cheek and surreal but it just works, good fun, excellent premise and I think I’ll be returning quite soon to Carlton Mellick III’s back catalogue, probably with Apeshit.

Clownfellas is due for release on the 17 July.