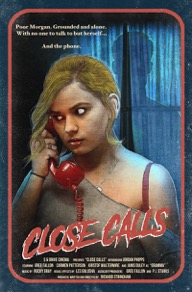 Writer/director Richard Stringham’s debut feature Close Calls shows that he is both a huge fan and an adept student of horror movies who is now also a burgeoning talent as a filmmaker. His loving homage to 1980s fright fare, set in the present day, is awash with reverence and verve, and contains plenty of originality to accompany its tributes to the cinematic past.

Close Calls is the tale of one night in the life of Morgan MacKenzie (Jordan Phipps in a star-making performance), a spoiled, troubled high-schooler who is grounded by her widower father David (Kristof Waltermire of Lakeside Massacre [2018], which also stars Phipps) after he catches her in a compromising position with her boyfriend Robbie Lane (Landen Matt). David and Morgan have a spirited conversation just before he leaves to meet his current girlfriend Brynn Collins (Carmen Patterson), who Morgan hates.

Before his departure, David reminds Morgan that she must give her grandmother (Janis Duley of The Perfect Host: A Southern Gothic Tale [2018]) medicine. When Morgan first goes upstairs to check on Gramma, it’s a bizarre, tense scene that hints at how outré Close Calls might go — however, more is in store than most viewers might guess, including a series of harassing phone calls, a psychopathic visitor, and other suspenseful elements. Stringham spins a lot of stylistic and narrative plates during this film, and to his credit, he does a fine job of building on his puzzle and holding matters together.

The film’s aesthetic is reminiscent of Italian giallo movies, with scenes bathed in, for example, reds and blues, and similar vibrant lighting choices that instantly bring to mind the works of Dario Argento, Leo Fulci, and the like. Interesting framing abounds, such as a sequence involving a cat-and-mouse grilling session between Morgan and a malevolent business associate of her father’s named Barry Cone (Greg Fallon of 10/31 [2017], The Boo [2018], and The Perfect Host: A Southern Gothic Tale), and a scene in which Robbie reads a letter to Morgan from an unhinged admirer. Craig Wynn’s cinematography is admirable, and Rocky Gray’s score is perfect for Stringham’s aesthetic.

Performance-wise, Close Calls belongs to Jordan Phipps. Often clad in only a bra and panties, with an occasional shirt added, she roams, runs, crawls, and creeps through the house of secrets in which Morgan lives, and shows a fine range of emotions, from bitchy and arrogant to vulnerable and frightened, to bravely ready to take down whatever evil presence stands in her way. Phipps is certain to get more roles on the strength of this performance. Greg Fallon is terrific as Barry Cone, bringing to life a sneering, leering force of evil. Janis Duley also gives a memorable turn as Gramma, cackling maniacally one moment and acting nefariously at another. Other performances range from good to borderline scenery chewing, but overall the cast acquits itself well. 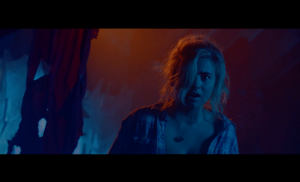 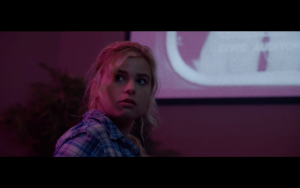 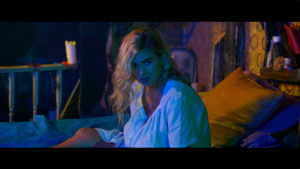 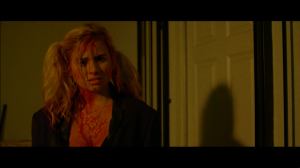 Two of the male characters put Morgan in situations that are sure to make many viewers squeamishly uncomfortable, including being taken sexual advantage of while under the influence of drugs. These scenes are strong enough to warrant a fair warning for potential viewers.

In Close Calls, Richard Stringham has crafted a clever, unique motion picture that goes well beyond merely being a valentine to its influences. The film offers some humour to occasionally lighten up the suspenseful proceedings, and Stringham proves himself as a talent to watch with this striking celluloid calling card.

Close Calls is currently on its film festival run, and has been picking up multiple awards along the way.