Clockwork Universe is a Steampunk story and the debut novel from author John W Dennehy, and if you’re a fan of stories of this ilk then it’s one that comes highly recommended. Set in a Victorian-era Boston, a pair unique creatures roam leaving death in their wake – a combination of leopard and rhino – which can’t be killed with conventional weapons. Therefore, it is up to a young punk, Kevin, who travels to the mysterious universe (by accident) and teams up the big game hunters, Silas Cunningham and Niles Barton, to save the day. It’s game on: will he become a successful hunter and take down the ferocious beasts, or will he become the hunted and end up prey like so many before him.

That’s the general cusp on the story, but the beauty of Clockwork Universe is that it’s a world deeply rooted in its own mythology; a world which is controlled by clockwork as the books title alludes to. The past setting of Boston with futuristic technology is imaginative and engaging, while Kevin provides a likeable entertaining protagonist you can root for – and if you’ve ever been a punk rocker in your time then you might even identify with him. That said, it’s pure pulp entertainment without any notable depth, and thus is a perfect read if you’re looking for something light thrills, albeit with some imagination and an interesting universe. 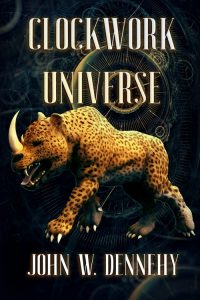 While Clockwork Universe will not change the landscape of science fiction, it will serve up a good dose of the elements which makes it such a compelling genre. It has fun with its premise and will appeal to those who appreciate Steampunk fiction. But John W Dennehy is a name to keep an eye on, as with this first novel he’s shown that he’s a good writer who has a knack for telling a good story with interesting concepts. Overall, Clockwork Universe is well worth a read and will serve as perfect mindless entertainment if that’s what you seek.