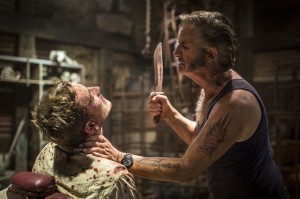 Not only is Wolf Creek one of the greatest Australian horror films of all time, it’s one of the best slasher films. Therefore, it should not seem strange to see that the film is going to be receiving a television adaptation. Scream proved that the slasher genre makes for perfect TV watching and there are plenty of great, popular horror TV shows around at the moment.

A very short and sweet teaser trailer for the upcoming Wolf Creek TV series has been released and it does well to pinpoint the main difference between the show and the films. This time, Mick Taylor (John Jarratt) will be getting a taste of his own medicine when he makes the mistake of leaving one of his victims alive.

Synopsis:
‘Wolf Creek,’ a six-part drama series, is a psychological thriller set in the world that fans of the films will recognise – but this time things are different. At first the pattern is familiar: Mick Taylor targets an American tourist family to terrorise and destroy. But the tables are turned when 19-year-old Eve survives the massacre and starts to rebuild her shattered existence by embarking on a mission of revenge.

The Wolf Creek series will air on Stan in Australia in mid-2016 with all episodes available to watch at once.